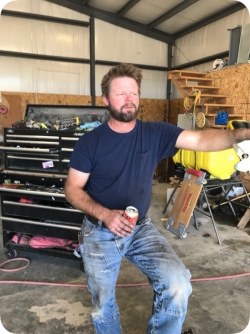 Benjamin James Garvin was born in Crawford, Neb., on October 27, 1979, to Larry and Ann Garvin.  He attended school in Crawford and managed to overcome the trauma of having his mother as one of his teachers in his elementary grades.  After graduation from Crawford High School in 1998, B.J. enlisted in the United States Marine Corps as a mechanic.  He proudly served with 5th Battalion 11th Marines, 1st Marine Division Fleet Marine Force until his honorable discharge in 2002.

Following his discharge from the Marines, BJ worked as an auto mechanic in Vista, Calif., for several years before returning home to Crawford, and remained here until his sudden death on February 6, 2020.  During the intervening years, he worked for Jake and Vicki Wasserburger, Dave Moody, Jim’s Well Service, and most recently, NE Department of Transportation.

On September 24, 2011, BJ and Robyn Rincker were united in marriage.  He was elated with his instant family of daughter, Aly and son Owen.  The family grew with the addition of their sons, Ben and Case, and BJ spent many, many hours being the proud dad of four.

BJ’s passion was working on cars.  He loved what he did and there was never a project too big.

He loved camping with his family, and the 4th of July was always one his favorite holidays.  We’ll always remember his fried chicken and making homemade ice cream.  He was an avid hunter, and deer season was the one time that he was unreachable.  It was probably his second favorite holiday.  BJ was a man that everyone could count on.  If you needed anything, day or night, he’d be there.

BJ was preceded in death by his father, Larry Garvin, and brother, Michael Garvin; his grandparents, Bea Garvin and Jim and Mariellen Soester, as well as his uncle, James Bruer Soester.  He leaves behind his much-loved wife, Robyn and their four children – Aly Dane (and fiancé, Matt Colwell), Owen Rincker, and Ben and Case Garvin;  Robyn’s father Roger and Chris Rincker of Mirage Flats, Robyn’s grandparents, Everett and Lola Rincker of Chadron, Robyn’s sister and husband, Kelly and Leon Garza of Chadron, and their children, Brittany and Aiden; Robyn’s brother, Seth and wife Katie and three daughters Laila, Stella, and Ava.  In addition, he is survived by his mother, Ann Stephens of Crawford; nieces, Kaylee and Tamra Garvin; nephew, Shawn Garvin; grandfather, Ben Garvin; his uncle, Don Perham, and three cousins, Sondra, Lisa, and Greg.

He will be missed by everyone who knew him.

A celebration of life will be held on Saturday, February 15, 2020, at 2 p.m., at the Crawford Community Building.  There will be an opportunity to share any memories for all who wish.

Chamberlain Chapel of Chadron is in charge of arrangements for B.J. Garvin.  Online condolences may be made at chamberlainchapel.com.  A memorial has been established for B.J.’s children.  Donations may be sent to Chamberlain Chapel, PO Box 970, Chadron  NE,  69337.