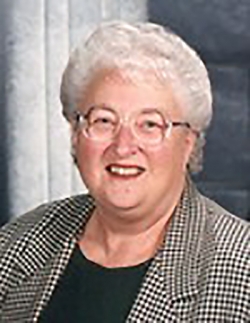 Carol Sue Compton 84, formerly of rural Jonesboro and Tipton, died Wednesday, February 19, 2020, at Howard Regional Hospital in Kokomo. She had been a resident of Century Villa in Greentown for the several years.

Carol was born in Marion, Indiana, on December 29, 1935, daughter of the late Paul and Dorothy Emma (Sheedy) Dye. She graduated from Fairmount High School in 1953. Carol married Philip G. Compton on March 18, 1956. Phil preceded her in death on August 13, 2014. Carol worked as a secretary at the Grant County Co-Op from 1954 -1955 as well as the ASCS Office and was the FHA secretary. Carol was a hard-working farm wife, working alongside Phil on the family farm doing what ever needed to be done. After retiring from farming in 1986, their love for the Lord led them to South Dakota serving and teaching the Native American people through Hands of Faith and later in Gordon, Nebraska, through Jesus Cares Ministry. Carol was responsible for the corporation news letter and cooking for the reservation visitors. Carol was a terrific cook and never let you leave hungry! She was a member of Harmony Christian Church.

Arrangements are being handled by the Fairmount Chapel of Armes-Hunt Funeral Home and Cremation Services, 415 S. Main Street, Fairmount, Indiana, where visitation was held on Sunday, February 23, 2020, from 2-6 p.m. Funeral Service was Monday, February 24, 2020, at 2 p.m. with Pastor Ron Meyer officiating.  Burial was at Park Cemetery.

Memorial contributions may be made to the Harmony Christian Church Building Fund in care of the funeral home.

Memories and condolences may be shared at www.armeshuntfuneralhome.com