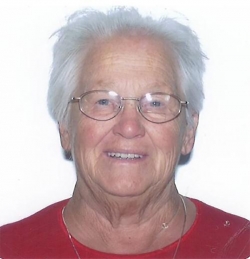 She married Vernon Tiensvold on Oct. 20, 1955. Doris and Vernon started their family in Rushville, Nebraska, and then moved to Great Falls in 1965.  Doris enjoyed working at the nursing home and then was self-employed.  Doris and Vernon moved to Missoula, and eventually to a twenty acre farm in Arlee. She enjoyed gardening, playing cards with family and friends and bowling on a women’s league. Doris would often be out doing whatever was needed to run the farm. Her greatest joy was her family where she enjoyed sporting events and was fondly referred to as “Granny”.  She was known for her many favorite meals which included fried chicken, apple pie and potato salad.

Per Doris’ wishes, a cremation has taken place. Services will be held on April 11, 2020, at 11 a.m., at the Jocko Valley Baptist Church in Arlee. Reception to follow.