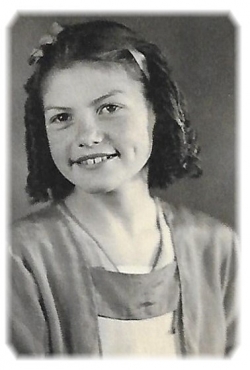 Jeanne Elizabeth Moss, age 92, of Gordon, Nebraska passed away on February 29, 2020 at Gordon Country Side Care with her daughters by her side.

Jeanne was born June 28, 1927 to Edward and Marvel Burke at Oshkosh, Nebraska.  She was the third of 3 children.  She grew up on the family ranch south of Oshkosh, Nebraska between the Platte River and the bluffs.  She and her siblings attended a rural country school. She graduated from Oshkosh High School in 1945.    She was a free spirited, adventurous girl.  Riding her horse bareback in the canyons and across the river to visit cousins and friends.  She and her brother Keith and sister Janice, had many adventures including a broken arm when she and Keith were riding double and she fell off. She tried to pretend to her parents her arm was fine even though it was at a very odd angle.  Jeanne was quite ill as a very young child and Janice was her caring angel.  That roll continued through the years.

Jeanne and Donald Saunders were married January 18, 1946 and moved to Denver, Colorado.   Diane was born in 1947.  While in Denver she worked at Children’s Hospital and thus began her love of nursing. She wanted to become a nurse, but for the time being, life got in the way.  They were divorced in 1948.   After she and Diane moved back to Oshkosh, she worked at Sioux Ordinance Army Depot in Sidney.

She and George Ivan Moss were married June 11, 1950 and to this union were born Marvel Lea, Michael Ivan and Patricia Jeanne.  They lived on three different Rush Creek Ranches, Lisco, Lewellen and Gordon.  It was a good life.  She took care of her children, cooked for the hay crew, helped round up and work cattle (which she preferred over having to stay in the house) and raised a big garden.  She belonged to Midway Extension club and a craft club.  She enjoyed getting together with friends and she and Ivan loved to dance.  She could often be heard singing as she worked.  When Ivan came home with a boat, she was as happy as the kids.  She learned to water ski and didn’t need much encouragement to fry a chicken and head to the lake.  Camping trips to Yellow Stone, Lake Powell, the Black Hills, Canada, Lake McConaughy and Angustura were family events.  They later traded the tent for a camper and continued to explore.  She loved the outdoors and was always ready for an adventure

She was a caring Mom, teaching her children the value of compassion for others, hard work and discipline, and a loving Grandma! She would always get down on their level and look at them eye to eye and really listen.  She would leave the bustle of a family get together and could be found playing with the grandkids. She had very strong Christian beliefs.  The whole family attended St. Leo’s Catholic church and there was never an option if the kids wanted to go or not.

In the 1970’s Jeanne started working at the Good Samaritan Nursing Home and started taking nursing classes at Oglala Sioux Community College   She graduated with her Registered Nursing degree June 29, 1980, and continued to work at the nursing home into her 70’s.  She had finally realized her dream of becoming a nurse and her family was so proud of her.  She loved the elderly and thought of each one as her family.  She also loved the many caring people that she worked with. Her family has been told by numerous people how much of a difference she made in their loved ones lives and what a wonderful nurse she was.  She retired several times but kept going back to work.  She finally let her license expire so she would no longer be tempted.

As Ivan’s health deteriorated, she took care of him at their home and her nursing skills were again utilized.   His death, March 27, 1999, was very devastating and her life stood still.

Later, she and her friend Johnny Paul had many adventures.  Riding a 4wheeler at break neck speed, hunting, canoeing down the Niobrara river and traveling near and far.  Her family often received a phone call saying “Guess where we are?”  They were very good for each other.