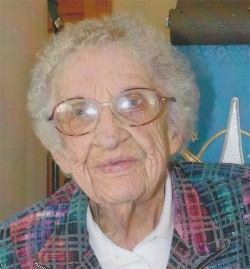 She was born February 23, 1929, in Canova, S.D., to Herman and Elsie (Koepsell) Zulk.  She grew up in Canova, S.D., where she attended school through the 9th grade.  The lack of a high school diploma was rectified when she proudly received her GED in 1989 through Western Community College.

Merelda married Wallace Everett White and they had three children: Sara, Howard and Carl. They later divorced.  She married Lloyd Leroy Dreyer on April 15, 1968.  This marriage lasted 25 happy years.  They enjoyed working on his family ranch and being active members of the Immanuel Lutheran Church.  Helping with the churches’ 100th Centennial book and writing the monthly church newsletter were highlights of her church service.

In 1989 she joined the American Legion Auxiliary and in 1994 became their secretary/treasurer, a position she held until recently. Always community minded, she organized donations for the Blood Bank for almost 25 years.

Merelda has been a part of the Rushville community since 1953.  She worked as a grocery clerk, mainly for Wright’s IGA, for many years and remained active in her church, the Legion and keeping up with her family until her death. Being chosen 2016 Grand Marshall was a highlight of her life.

She was preceded in death by her husband Lloyd L. Dreyer; parents Herman and Elsie Zulk and brothers Elmer and Leonard Zulk.

Private Graveside services will be held at 1:00 on Friday, April 17, 2020, at Fairview Cemetery in Rushville, Neb. A memorial service is planned after the COVID-19 virus has subsided.

A memorial has been established to the American Legion Auxiliary and the Immanuel Lutheran Church, both of Rushville, Neb. Memorials and condolences can be sent to Howard White, Box 373, Upton, WY 82730. Chamberlain-Pier Funeral Home is in charge of arrangements.