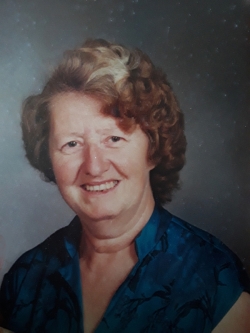 Mary was born the third oldest child of Ralph and Ruby (Lymath) Krueger on August 26, 1940, in Alliance.   She was the younger sister of John and Fred and later became a big sister to Calvin, Bill, Ruby and Leta.

Mary worked at EHR from 1974 until 1977, there she met her true love Roger Olson, who won a bet with Ruby when she said yes to go on a date with him.  Roger teased her about running across the state line to elope and several other things for 35 amazing years. They shared an amazing love that usually only happens in fairy tales! Roger and Mary were married in Alliance on February 18, 1977. Nine months later on December 2, their daughter Lori was born on Roger’s birthday. About seven years later on November 17, their son Cory was born rounding out their family.

Mary and Roger moved to her dream house that Roger built for her 20 miles from the nearest town of Hemingford. She adapted fast to becoming a farm wife, raising chickens, gathering eggs, bottle feeding calves and sheep and cooking for brandings and the sheep shearer’s. Her potato salad and apple pies were always a favorite! She taught her kids how to cook and the secret to a good pie crust. She cooked and canned and raised her kids and no one ever left her house without a kiss, a hug or a full tummy!

She was preceded in death by her parents, her brothers, John, Fred, Calvin and Bill, her beloved husband, Roger, and her granddaughter, Cassandra Hankinson.

Visitation will be Tuesday, May 5 from 2-6 p.m. at the Bates-Gould Funeral Home in Alliance.  A graveside for her family only will be Wednesday at 10:00 a.m. at Calvary Cemetery in Alliance with Father Joseph Joseph will officiate.  Memorials may be sent in care of Lori Hankinson, P.O. Box 151, Hay Springs, NE  69347 for a future designation.