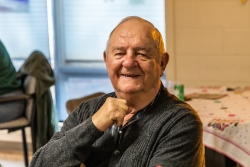 James LaVern Hankins passed away on May 1, 2020, at the age of 78.  He was born on December 2, 1941, in Rushville, Nebraska, to Jim and Violet (Eckerle) Hankins.  He graduated from Hay Springs High School in 1959.  Upon graduation, he married his high school sweetheart, Barbara Bachmann on June 4, 1961.  With this union was born two daughters: Karla and Kim.

LaVern began employment at Northwest Rural Public Power in 1966, where he filled many roles during his 38 years of service.  He was very dedicated to the community, having served on the board of the Pioneer Manor and Lister Sage Community Center.  He served as a City Council member and was a volunteer for many years at the Hay Springs Fire Department.  LaVern was very active in the building of the Zion Lutheran Church and later served as the deacon, trustee, and treasurer of the church.  He spent many hours improving the Hay Springs golf course, planting trees, and establishing the clubhouse.

LaVern was a devoted husband, father and grandfather.  He enjoyed spending time with his children and grandchildren, never missing any of their activities.

During his lifetime, he enjoyed many activities such as team roping, painting ceramics, golfing, traveling and camping.  He was a sports enthusiast and was a big supporter of the Hay Springs Hawks, Cornhuskers and the bull riding.  He will always be remembered as a man with high values, great sense of humor and willingness to help others.

Visitation will be held on Wednesday, May 6, 6:00 – 7:00 p.m. at the Zion Lutheran Church. A funeral service will be held on Thursday, May 7 at 10:00 a.m. at the Zion Lutheran Church in Hay Springs, Neb.  For those unable to attend, a live virtual service will be available by selecting the link on the Chamberlain Mortuary website.

Memorials can be sent to the Chamberlain Mortuary.