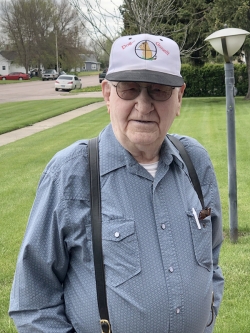 Having had ninety well lived years, Forrest Leonard Nelson passed away April 26, 2020, at Gordon Memorial Hospital. Forrest was born to Marvin Earnest (Stub) and Beatrice Carolyn (Iverson) Nelson at Denby, South Dakota, on October 4, 1929. Although for many years his birthday was celebrated on October 5 until his eldest sister Murial finally got him straightened out. The baby of the family, Forrest grew up with his three older siblings, Muriel, Ted, and Lyle. He attended Pleasant View School just north of their home by the Denby dam through the eighth grade. His sister Muriel taught the school his last year. In 1931, the gospel was brought to the Nelson family by Harold Hollingsworth and Willy Kleffman; Forrest made his choice to serve God when he was eleven and remained faithful to the very end.

Forrest helped his parents on the ranch and worked at neighboring ranches until he was drafted into the United States Army, serving on the frontlines of the Korean War on Heartbreak Ridge as a medic. Prior to his deployment he saw Hazeloraine Sandoz singing at his grandfather’s funeral and knew she was the girl for him. They were married August 1, 1953, in Hot Springs, South Dakota, while he was on a thirty day leave, with Haz’s sister and brother-in-law, Ann and Lloyd Smith, acting as their witnesses. The couple ranched and raised their three children, Terry, Trent, and Trenda, on the Sandoz homestead north of Lakeside for 40 years. After being disappointed with some bulls he’d purchased, Forrest attended a school to learn artificial insemination (AI) in Belvedere, Illinois. He was the first to use AI in this part of the Sandhills, working as an ABS sales rep for 56 years, and the second to put in irrigation. In 1994, Forrest and Haz moved to Rushville where they enjoyed three years of retirement before Haz passed away.

Forrest married a lifelong friend, Maxine Jesse Leach, on October 30, 1997. The two spent seven years together, traveling to visit friends and watching their grandchildren grow up, before Maxine succumbed to cancer. On November 18, 2005, Forrest married Lillian Erickson Carl. Together they enjoyed fourteen and a half wonderful years, travelling to Washington, Minnesota, Arizona, and Mexico as well as to many conventions and grand and great-grandchildren’s birthday parties. They searched for treasures in antique shops, adding to his bell collection and acquiring unique pieces of horse tack. He was the kind of husband who thanked his wife for breakfast even if he made it himself. Forrest regularly attended the weekly cattle sales in Rushville and Gordon and nearly every morning went to Westco to visit with his friends and see what was going on. He always said it was poor management if you didn’t get at least three naps a day and upon rising would say, “The first jump is the worst.”

Forrest’s love for God and for those he surrounded himself with was evident in his every action. He was a devoted husband, father, uncle, and grandfather and was always willing to provide comfort and wisdom to anyone who came to him with a need. He didn’t like to be alone, and so kept himself surrounded by loving people. Perhaps it is best said in his own words, “What I can’t understand is why I could have three good wives and some men don’t even get one.”

Graveside services were held Monday, May 4, 2020, 10:00 a.m. at Fairview Cemetery, Rushville, Nebraska. A memorial has been established for the Gordon Memorial Hospital and donations may be sent in care of Chamberlain-Pier Funeral Home, PO Box 366, Gordon, NE 69343.