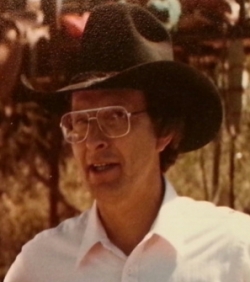 Kenny was a true cowboy, one of a kind and very much a part of a dying breed. He filled his 81 years with adventure, art, friends and family.  He could do just about anything and did during his story filled time on earth. From riding some of the rankest bulls and saddle broncs during the peak of his rodeo career resulting in winning the 1960 Nebraska State Bull Riding Championship, riding and training jumping horses, driving cattle trucks coast to coast, tooling leather and making saddles, a horse shoe pitching champion, a talented, award winning artist who created hundreds of beautiful western sketches and a collection of wood carvings, he did it all.

He will be remembered by those who knew him for his absolute love of life and people.  He did not know a stranger and found joy in everything from showing his grandchildren how to fish and draw to drinking coffee and carving wood with old friends.

Kenny was preceded in death by his parents, brother Barry Tausan, and grandchildren Justin and Hannah Davis.

A memorial service and celebration of his life will be held on Friday, July 31, 2020, at 11:00 a.m. at Gordon United Methodist Church with burial of his ashes to follow at the Gordon Cemetery in Gordon, Neb.

The family extends a heartfelt thank you to the care givers at the Sandhills Care Center in Ainsworth, Neb., and the North Platte Care Center and Great Plains Regional Hospital in North Platte, Neb., for the love, care and compassion shown to Kenny in the past year.