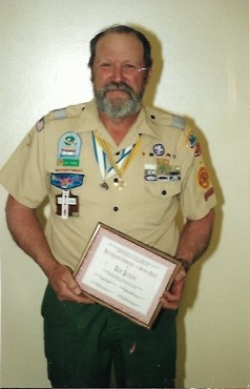 Funeral services for David Perkins will be held in Hay Springs, NE on August 24 at 10:00 am at the St. Columbkille Catholic Church.  Internment to follow at the Hay Springs City Cemetery.

David L. Perkins, 72, passed away on August 9, 2020, in Rapid City, SD after a long struggle with many health issues.  David was surrounded by family.

David was born February 18, 1948, in Alliance, NE to Leonard and Lucille Perkins and had 6 siblings.  David’s early years were spent playing/fighting with his siblings and many cousins, church activities, camping, fishing, cars and, of course, Boy Scouts.  After graduating from Alliance High School in 1966, David joined the Army and served tours in Vietnam.  Upon his discharge in 1969, after a short time back in Alliance, David settled in Hay Springs, NE where in 1972 he married the love of his life, Sandra (Brice) (deceased 2016) and had 3 children:  Jason (Scottsbluff, NE), Justin (Shannon – Rapid City, SD) and Jennifer (Scottsbluff, NE) resulting in 5 grandchildren.  Dave’s family was his pride and joy and he was also the family historian.   Dave is survived by his children, grandchildren, 2 sisters, 2 brothers, many nieces, nephews and cousins.

David (Perk) worked for the City of Hay Springs from 1971 to 1975.  He then joined Co-op/Westco where he worked until he retired in 2005.  Dave was very involved in the Hay Springs community through volunteering as the curator for the Heritage museum, VFW and American Legion to name a few.  Dave had a 1966 Chevelle before kids started to come and he was able to find the same Chevelle later on and had a lot of fun fixing it up and running it around town.

David’s {Tiny’s} life passion was Boy Scouts.  From early childhood until the end he was devoutly involved in any number of ways and earned every rank available.  As many experienced, Dave could comfortably talk for days about Boy Scouts and probably never repeat himself.  He spent many summers up at Laramie Peak Scout Camp in one capacity or another.  Dave was Scout Master and led both his boys though the ranks to Eagle Scout and proudly helped get his grandson, Issac, through the same ranks.  Other highlights were visiting Philmont Scout Camp, attending Jamboree and following the history of Boy Scouts by traveling to England to see where it all began.  Dave was a veteran Boy Scout for over 60 years.  Along the way, Dave started collecting all things Boy Scouts creating a very large collection.  That collection can be seen starting next year at Laramie Peak Scout Camp at the museum he started there.

Through Dave’s involvement in his busy life, he didn’t know a stranger and was always there to lend a helping hand to anyone in need.  His ready smile and jovial attitude will be missed.