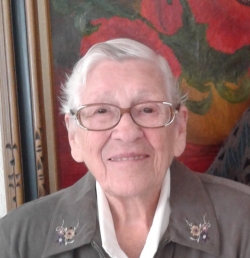 The family made their home on a ranch 20 miles southeast of Merriman, Neb. Irma thoroughly enjoyed the work and the play involved in being a country girl on a sandhills ranch. She and Charles rode their horses to the little country school nearby and attended through the 8th grade. She then went to Gordon High School and graduated in 1947. After graduation, she attended a business school in Omaha, NE where she met friends that she kept in touch with for many years.

On May 20, 1948, Irma married Jay Webster, and they began their life together on the family farm just north of Gordon. A daughter Carol was born in 1950 and a son Scott was born in 1951.

Family and friends meant the world to her. She was a wonderful cook and many times there were extras at the table. When Jay needed her, she would be found outside helping with the farming, haying or milking cows. They were both active in the First Presbyterian Church and, over the years, Irma served in many capacities in the church.

In 1967, Jay and Irma embarked on a new adventure, moving to a ranch located about 50 miles northwest of Winnipeg, Manitoba, Canada. They spent the next 20 years living in Manitoba, making many lifelong friends and so many memories during that time. Another highlight of that time was living near three of their young grandchildren and being “Ma” and “Pa” to Daniel, Andrew and Sara.

In 1987 they moved back to Gordon, Neb. Irma worked for several years at Radio Shack and was once again actively involved in the church. She enjoyed being able to spend more time with the Nebraska grandchildren.

Memorial Services were held Monday August 17, 2020, 10:00 AM at the Gordon Cemetery. A memorial has been established for the First Presbyterian Church or Gordon Countryside Care and donations may be sent in care of Chamberlain-Pier Funeral Home, PO Box 366, Gordon, NE 69343.