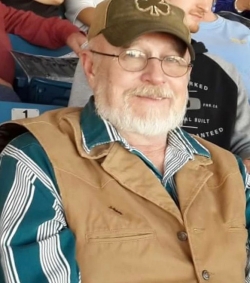 John graduated from Hay Springs, Nebraska.  He married his first wife Jody Feddersen in 1980.  Together they had two children and lived in Hay Springs, where he worked for the county. In 1997, he moved to Bassett where he met Jina Anderson and they were married in 2001.  He worked for the City of Bassett until his retirement in 2016. During retirement, he enjoyed mowing at the country club, tinkering in his wood shop and watching his grandchildren grow.

Nothing was more important to him than his family, and no one was a stranger, he spoke to everyone like they had been friends forever.

A gathering to remember the life of John Wright will be held at 2:00 p.m., Saturday, August 22, 2020, at the Scott & Lauren Swanson shop at 524 Augusta St., just north of Hometown Auto in Bassett.  Due to Covid-19 restrictions, there will not be a meal, but feel free to bring your own beverages.   Hoch Funeral Home of Bassett assisted the Wright family with the arrangements and online condolences may be left at www.hochfunerahome.com/