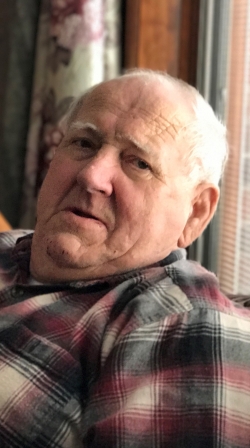 Charles Russell DeWitt was born on February 26th, 1939, in Rushville, NE to Russell and Ghita DeWitt. Chuck passed away August 21, 2020, at Gordon Memorial Hospital. He graduated from Rushville High School in 1957 and then attended Chadron State College for a short time. During this time he sang and played his guitar on the country show Curly’s Corral. He met the love of his life, Bonnie Joyce Smith from Hay Springs, also during this time. Chuck and Bonnie were married on November 13th, 1959 in the Hay Springs Methodist Church. They were married for sixty years, and during this time were blessed with six children.

Chuck worked in the grocery business for approximately forty years until his retirement. He entered Pioneer Manor in Hay Springs four years ago for health reasons. Chuck enjoyed singing and playing his guitar anytime there was an audience. Chuck also enjoyed golf, bowling, hunting and fishing, Sunday drives, “Planes, trains and automobiles”, and Husker football (Go Big Red). After his retirement, Chuck enjoyed working with the elementary kids in Rushville as a Foster Grandparent. He also was very active at the First Methodist Church as a layman, where he shared his love for his God.

Chuck never knew a stranger. Everywhere he went he had a story to tell and made friends with all. Chuck was always proud of his family and would tell anyone he came up to about what they were up to. He lived his life with kindness and love and if you knew him you were better for it. His family and friends will miss him very much.

Chuck is survived by his wife Bonnie, his daughter Penny and husband Donald Cave of Stuart, IA, his daughter Pam and husband Joel Burbach of Rushville, his son Chuck Jr and wife Kristi DeWitt of Grand Island, his daughter Suzi and husband Brett Reynolds of Des Moines, IA, his son Casey and wife Trisha DeWitt of Box Butte, SD, and his daughter Patty DeWitt and partner Aaron Vallete of Greenfield, IA. Chuck is also survived by his sister Marlene Dykes of Rushville, Sarah Wiedner of Omaha, Sally Hatch and Judy Dorsey and husband Ron of Gordon, Colleen Harvey and her husband Rob of Chadron, and his brother Richard DeWitt and wife Chris of Omaha. He was blessed with thirteen grandchildren, twelve great grandchildren and one on the way. Preceding Chuck in death were his parents Russell and Ghita DeWitt, sister Elenor Vendetti and husband Pat, brothers-in-law Max Dykes, Elton Wiedner, Dave Hatch and grandchild Bridgette Reynolds.

Funeral Services were held Tuesday August 25, 2020, 10:00 am at the Morse Memorial Methodist Church in Rushville, NE, with burial in Fairview Cemetery. A memorial has been established and donations may be sent in care of Chamberlain-Pier Funeral Home, PO Box 366, Gordon, NE 69343.