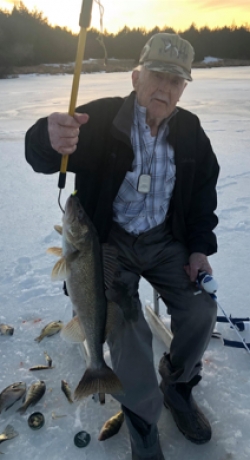 Willard Dean Wellnitz was born on the last day of Spring in 1930 at his parent’s, Herbert and Caroline (Jungck) Wellnitz, home south of Rushville and passed away on August 31 at Gordon Memorial Hospital after 90 years of living life to the fullest.

Willard attended grade school at District #78, high school in Rushville, and attended for 1 ½ years at Chadron State College.  He was active in music, playing bass horn and singing in men’s groups, and played football during high school; and ran track in college.  When Willard, who normally ran the short sprints, got in trouble with the track coach, he was told he would be running the half mile that day.  The coach told Willard to follow his teammate to pace himself, but when Willard decided the pace was too slow, he passed him up and ended up earning second place! Throughout his life he showed this strength and perseverance in every aspect.

Willard served for two years in the U. S. Army, stationed in North Carolina.  He was supposed to be shipped overseas for the Korean War, but his papers were lost and never reached him, so he never left the states. He told stories about the men he met, including one man who took him home, and said he loved bringing company home because his mother would make gravy to go with the bread when company came.  When his brother was getting married in Colorado, Willard flew back on a transport plane, getting a flying lesson in the process, then hitchhiked from Denver to Fort Collins, getting there just in time for the reception.

Willard settled on the farm and in the late 50’s went to the local Farm Services office, where he saw a lovely brunette working, who would end up being the love of his life.  In 1963 he married that woman, Joyce Sager, and she said she thought there were probably hearts breaking all over Sheridan County when she took him off the market.  Their family grew through the years with children Kim, Joan, Carol, Linda, and Fred filling their home with laughter, love, and shenanigans.  Willard’s love for his family and for young people carried over into so many lives throughout the years, as many loved him as a surrogate father and grandfather.

In the precious few moments when he took time to indulge in his favorite hobbies, Willard could be found playing cards with friends or at the poker table, including playing in the World Series of Poker tournament in Las Vegas twice. Those, hearty enough to battle the cold, would often find him out ice fishing in the dead of winter. Music played an important role throughout Willard’s life, and he had the natural gift of being able to pick up almost any instrument to play.  Besides playing the bass horn in high school, he also played at playing the guitar, banjo, accordion, ukulele, fiddle, and piano.  Many in the community enjoyed his singing and playing including at weddings, anniversary celebrations, and family gatherings.

For all of his 90 years, Willard gave his heart and soul to the land and his livelihood on the farm.  He got up, went outside, and worked hard for what he loved every single day. He taught his family so much about the value of hard work, appreciation for what you have, and responsibility.  He was an astute businessman, but those he interacted with always knew he would treat them fairly.  Good luck followed him, but he once said, “It’s funny, but the harder I work, the luckier I get.”

Willard was a man of strong faith and spent many of his later years enjoying studying the scriptures, attending church and Bible study.

A memorial to be determined has been set up in Willard’s name and can be sent in care of Chamberlain-Pier Funeral Home, PO Box 366, Gordon, NE 69343. Graveside Services were held  Friday, September 4th at Fairview Cemetery in Rushville at 10:00 a.m.