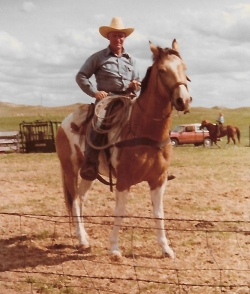 Charles Marvin Malmberg was born to Emil and Vera Malmberg in Gordon, Neb., January 12, 1929. He passed away September 14, 2020, at Rapid City, S.D. Charlie was the first of seven children and spent his childhood on various ranches throughout the sandhills.

After graduating from the Agricultural High School in Curtis, Neb., Charlie served in the military from October 15, 1954, through September 29, 1956, earning a good conduct medal.

Charlie married Betty Jackson in October 1963, after meeting her at a Christmas dance in Merriman. The couple went to work for the Abbott Ranch near Hyannis for a year and then joined Charlie’s dad at the Annette Place north of Gordon. They then leased the Eckerly Place south of Gordon for several years. A son, Chauncey, was born during their time there. After leaving the Eckerly Place, Charlie leased a place near Valentine before returning to Gordon in 1998, where he did day work for several area ranchers before retiring.

Charlie loved ranching, particularly the fall cattle work. He raised a garden and would often spend his evenings tending the garden after a long day in the hayfield.

Charlie is survived by his son Chauncey of Rapid City, S.D., his granddaughter Emma Malmberg of Dickenson, N.D., brother Jack of Lander, Wyo., sisters Nancy and June of Abilene, Texas, and Sally of Seattle, Wash., along with several nieces, nephews and cousins. He was preceded in death by his parents, his wife, and brothers Don and Tom.

Services were held Friday, September 18, 2020, 10:00 a.m. at the First Presbyterian Church and burial was held in the Gordon Cemetery. A memorial has been established for the Gordon American Legion and donations may be sent in care of Chamberlain-Pier Funeral Home, PO Box 366, Gordon, NE 69343.