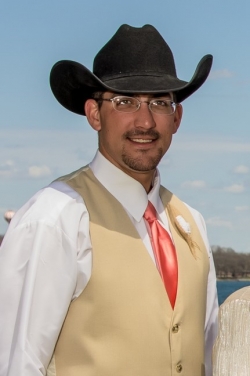 Kiel David Cook passed away unexpectedly in Martin, South Dakota, on September 12, 2020, at the age of 35.

Kiel was born on July 18, 1985, in Gordon, Nebraska, to Kenny and Nancy Cook. He attended Central Elementary School until 5th grade when his family moved to Tuthill, S.D., where he was the final 8th grade graduate of Tuthill Elementary School. In high school, he was an active member of Key Club, National Honor Society, and Rodeo Club where he and Sam Risse placed 4th in Team Roping at the State Finals. He graduated Salutatorian from Bennett County High School in 2003 and Chadron State College in 2007. After college, Kiel worked at First National Bank in Chadron, Neb., for a brief time before returning to Martin, S.D., to pursue his love of ranching. He worked alongside Adrienne Hicks for Roger and Debbie Sieck. After many years of living the life he loved, he concluded his ranching career with Cook Cattle Company.

Kiel was known for his contagious smile and his world-renowned hugs. He enjoyed spending his time being an extraordinary friend, known as “Milhous” to many; a dancer with anyone who could keep up, a passionate fun-loving “Uncle Cheese” to his nieces and nephews, and a treasured son and brother who will be greatly missed by all.

Kiel is survived by his parents Kenny and Nancy Cook of Martin, S.D.; siblings, Kasey Jo and Andy Dawson, Shyanne, Sydnee and Syerra, of Valentine, Neb.; Korey and Chante’ Cook, Kayne and Kage of Martin, S.D.; Kelly and Jeannine Cook, of New Underwood, S.D.; Adrienne and Merle Hicks, Rylee of Martin, S.D.; grandmothers, Betty Marie Cook and Jean Weinmaster, both of Martin, S.D.; numerous aunts, uncles, cousins, friends, and his second family, the Risses. He is preceded in death by grandfathers, Joseph Hickman Cook and Dave Weinmaster; and great-grandparents, Frank and Hazel Buckles.

A funeral was scheduled for 10:00 a.m. Thursday, September 17, 2020, at The Old Legion Auditorium. Burial services followed at the Martin Community Cemetery with a luncheon at The New Legion. Pastor Bill Hines will officiate the ceremony. All are welcome to attend and celebrate Kiel’s life. A memorial has been established at Security First Bank Martin, S.D. The family would like to thank the Bennett County Ambulance and Fire Department, Hospital, Emergency Staff, and First Responders. Bennett County Funeral Service is in charge of arrangements.