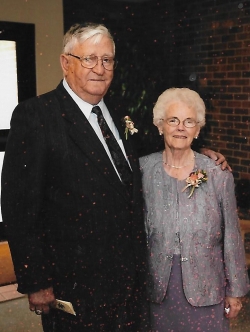 Clayton Tallon passed away peacefully at Pioneer Manor on October 24, 2020. Clayton was born on October 17, 1932, to Thomas and Katie (Skoda) in Rushville, Neb.

Clayton was raised on the ranch 12 miles north of Rushville by his grandparents Charlie and Bessie Skoda. He attended the Craven Creek School and rode his horse five miles each way. He moved to Rushville when he entered the 7th grade to live with his mother and graduated in 1950.

Clayton met the love of his life, Doris Colwell, at the roller-skating ring in the basement of the Plains Theatre. They were married on December 28, 1951, and to this union four children were born: Peg, Mike, Vic and Sally. He and Doris lived on the family farm until they moved to Pioneer Manor.

Clayton was a Mason and served as Worthy Master for Amity Lodge. He worked at the Rushville Sale Barn for many years and was on many boards and committees.

Clayton loved to tell stories and always had a good joke he could share. He loved to rock hunt, do wood working, read, listen to jazz music, but most of all he loved to visit. There was always someone stopping by to sit on the porch. Usually they were invited in for one of Doris’s homecooked meals or to have a drink or two.

Clayton and Doris were so proud of their grandchildren and all they accomplished. They didn’t miss a game or event if they could possibly be there.

Clayton was a devout democrat and got his last vote in for president a couple of weeks ago. He and Doris changed parties to vote for a family friend, but you can bet they were at the courthouse the day after election to change back to the democratic party.

Clayton moved to the Assisted Living to be closer to Doris. Even though she did not remember a lot of people she always remembered him. She would often tell him she wanted to go home, and he would tell her this is our home now.

Clayton lived to turn 88 years the week before he passed. He had the best life. He loved his family and friends and most of all he loved Doris, his wife of 68 years.

On behalf of his family we would like to thank the entire staff at Pioneer Manor Nursing Home in Hay Springs for their love and care that they provided for our parents during their stay.

Doris Tallon passed away peacefully May 2, 2020, at Pioneer Nursing Home surrounded by her family. Doris was born January 1, 1931. She was the second of eight children born to Everett and Margaret Colwell (Kearns).

She lived most of her childhood years in the White Clay area. She attended elementary at the Extension School and attended high school at Rushville High School graduating in 1949. · After graduating she taught at a one-room school near Hay Springs for three years. She married Clayton Tallon on December 28, 1951, and they lived on their ranch until she moved to Pioneer Manor in Hays Springs.

Doris was known for her wonderful cooking. Her jams, jellies and baked goods were the best. Visitors never left empty handed. If you didn’t stay for a home cooked meal, she sent you home with some of her baked goods or jelly. She enjoyed sewing, crocheting, embroidering, quilting, but most of all she enjoyed her family.

Doris was a member of Eastern Star serving as Worthy Matron and Guardian of Jobs Daughters for many years. She worked at the Rushville Sale Barn and was a cook at Rushville Public Schools. She also was a teacher’s aide at Clinton school and Extension school.

Doris was a hard worker, yet in the midst of work she liked to have fun. She loved to play cards and games and she always played to win. She also loved to watch movies especially with her grandchildren.