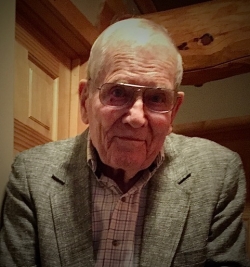 Don was born June 14, 1923, in Hooker County, Neb., to Clyde and Mildred (Trudell). Don attended Primary and High School in Merriman, Neb.  He was married to Eveyln Hines in 1943, and to this union was born two sons and two daughters. David Weber,  Laura Schafer,  Shirley Blaylock and Jim Weber.

Don lived and worked the majority of his life in Nebraska. During the first part of his adult life he worked as a ranch hand on various ranches including his fathers ranch. Don finally settled in as an employee at Weber Equipment, the family business, located in Merriman.  He later became a full partner and worked at the shop until he retired. After retirement he worked for six years at Rein Brothers in Chadron, Neb. This job allowed him to show his ingenuity! He motorized a John Deere peddle tractor and converted a riding lawn mower into a 16 ft skunk complete with ability to spray for the Fur Trade parade. In retirement Don enjoyed fishing, gardening, and tinkering in the garage creating.

Due to Covid-19 private burial services will be held at a later date for the immediate family.

“Say not in grief that he is no more but live in thankfulness that he was.”—HEBREW PROVERB