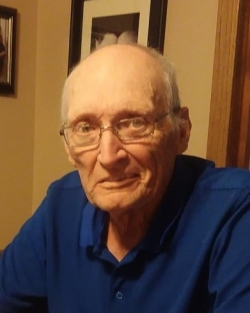 Memorial Service will be held at 11:00 a.m. on Thursday, November 19, 2020, at the First United Methodist Church in Pierre. Visitation will be held at the church for one hour prior to the service. Masks will be required for attendance and social distancing is encouraged. For those unable to attend, Tom’s service will be live-streamed at the top of his obituary page at www.isburgfuneralchapels.com. Online condolences may be written at www.isburgfuneralchapels.com.

Tom Vernon was born on July 14, 1940, in Ashland, Ohio, to Otley Sellers Vernon and Anna Regina Jensen and joined his older brother James “Jim” Vernon. His family lived in Ashland until Tom was four when they moved to the Presho, S.D., area. His working career started in high school for his uncle John Jensen and Leo Terca. He graduated from Presho High School and attended two years of college at Southern State College in Springfield, S.D. A joke in our family was, “did he really attend before the barb wire was added to make it a prison?” He later ran a garage with his brother Jim. During this time, Tom had married Lorna Terca, and together, they adopted two children, Michael and Kelle Vernon. Due to the draft, Tom had to step away from the garage life. When President Kennedy signed the bill for married men to not serve, Tom was just completing his physical. Tom was able to return home without being inducted.  He spent his later career working for Pepsi in Chamberlain, S.D., then Western State Wholesale in Pierre.  He moved to Alliance, Neb., for a route that had expanded. Tom was very active with a bowling league in Rushville, Neb., and he moved there to be closer to his friends.

In 1974, Tom married his second wife, Ardean Cerny, and they had one child, Ona. During his 46 years of marriage to Ardean, Tom worked at IGA Grocery, Stockman’s Bar and was the Legion Club Manager, all in Rushville, Neb. He worked for Chadron Wholesale until his retirement. In 1998, Tom and Ardean moved to Clinton, Neb., to live on family land. Tom worked as the janitor of Clinton, Neb., country school.  In 2004, they moved to Rosebud, S.D., for Ardean’s career. Tom worked for NAPA in Mission, S.D. They moved to Vivian S.D., in 2009. Tom worked part time at the Coffee Cup until the time of his death.

Tom enjoyed traveling, bowling, camping, fishing, doing puzzles, playing various card games, telling jokes, and sudoku puzzles. His greatest joys were spending time with his grandkids and making memories with his family. Anyone that knew Tom knew that he never met a stranger and that he loved telling a good joke, though the “good” part was iffy at times. He would be your biggest supporter and genuinely cared for everyone. No matter where he went, he ran into someone he knew or had a connection to someone he knew.

He is survived by his wife Ardean Vernon of Vivian; daughter Ona (Jason) Arnold of Pierre, son Michael Vernon and daughter Kelle Vernon of Florida; brother Jim (Elsie) Vernon and children of Sioux Falls; grandkids Justin Vernon, Hailey Vernon, Robert “RT” Arnold, Raeah Arnold and special grandkids Blu and Rocky; nephew Cole (Melissa) Kayton, of Burwell, NE who was more of a son than a nephew; and several more nieces and nephews who he loved very much. Tom also had many close friends that were just like family.

In lieu of flowers the family is asking that if you feel the need to give, donations can be sent in memory of Tom to the Vivian Lutheran Church for their “coffee crew” that meets daily that Tom was a part of, or the Home Cooked Hope meal ministry through the Methodist Church in Pierre, S.D.  Tom loved to give and see ministries like this do great things in the community.