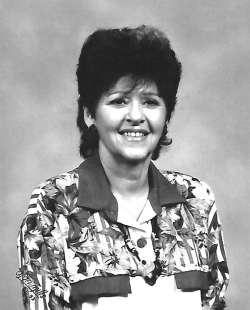 Suzie was one of six children born to George and LaVerne. They raised their family on a farm south of Hay Springs. Suzie graduated from Hay Springs High School and attended National College of Business in Rapid City, SD.

Suzie met the love of her life, Terry Spangler and they were married on April 2, 1958. They moved to the Spangler ranch southeast of Gordon. Terry and Suzie raised three children, Lonny, Vicki and Curt. The ranch was a home and destination for many nieces, nephews and cousins. Suzie never hesitated to welcome anyone to their home and worked hard to provide food and memories for them.

In 1986, Terry and Suzie moved to Gordon. They started managing the Jefco Inn in 1988. Suzie continued to manage the Jefco Inn after Terry passed away in 2011.  Many card parties and special occasions were held at the motel.

Suzie is survived by her children, Lonny (Brenda) Spangler, Vicki (Todd) Eitemiller, and Curt (Patti) Spangler, grandchildren and great-grandchildren. She was preceded in death by her husband Terry, parents George and LaVerne Ditsch, her sisters Mae Hall, Lolita Brinker and brother Don Ditsch.