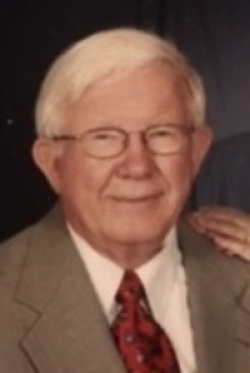 Walter H. Schmidt died November 17, 2020, at Toledo Hospital from Covid complications.  He was born September 19, 1935, to Harold and Helen (McGaughey) Schmidt in Sheridan County, Nebraska. Walter attended grades 1-7 in country school and attended the University of Nebraska School of Agriculture at Curtis, Nebraska for high school graduating in 1953.   He attended University of Nebraska and was a member of the Cornhusker Marching Band and Farmhouse Fraternity.  He graduated with a Bachelor of Science in Agriculture in June of 1957.  After spending three years in the United States Army, he returned to the University of Nebraska and received a Ph.D in crop production in June 1965.  He was employed by The Ohio State University as Area Agronomist with the Cooperative Extension Service, retiring in June 1995 after thirty years of service.

He married Alyce Ann Sides on June 26, 1959, at First Presbyterian Church, Loup City, Nebraska. They lived in Alexandria, Virginia, and Lincoln, Nebraska, before moving to Ohio in 1965.  He was a member of East Side Presbyterian Church, Fremont since 1967 serving as Elder and Clerk of Session.  He has been actively involved in Maumee Valley Presbytery serving as Moderator and on numerous committees and also served on some General Assembly Committees.   He served as a member and President of the Fremont City School Board. He was an active member of Masonic Blue Lodge, Scottish Rite Masons (receiving the Meritorious Service award), and Zenobia Shrine. He was a director of the Zenobia Road Runners transporting children to Shrine Hospitals.  He volunteered with American Red Cross and the Senior Center.  Walter participated in the Terra Community College Choral Society for a number of years. Walter and Alyce Ann have enjoyed traveling and spending time with children and grandchildren.

There will be no visitation.  A Celebration of Life will be held later.

Burial will be at Gordon, Nebraska. In lieu of flowers it is suggested memorials be made to: Shriner’s Hospitals for Children with “in memory of Walter”, and sent to Zenobia Shriners 8048 Broadstone Blvd., Perrysburg, OH 43551 or East Side Presbyterian P.O. 525, Fremont OH 43420.

Online Condolences may be expressed to the family at www.whhfh.com