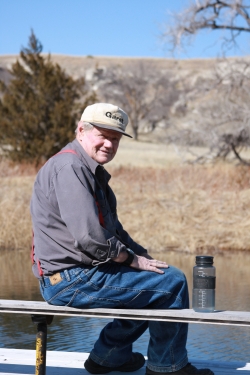 Jim loved science. A degree in mechanical engineering from the University of Wisconsin took him to Los Angeles and Atomics International, then to California Lawrence Radiation Lab in Berkeley as a research engineer, to Los Alamos as a test site engineer, and back to Berkeley.  Eventually his engineering degree was put to the test keeping equipment up and running on the Nebraska farm.  He loved to discuss and debate science and engineering with anyone willing to take the bait.

Jim loved the land.  A staunch conservationist, he and Jeanne cared for the farm and the Niobrara with a gentle touch.  Upon moving to the farm, he had a lot to learn, but with the help of neighbors and Jeanne’s family he learned to work the land, fix antique machinery and raise cattle for 20 years before retiring.  The farm land was then put into CRP in an effort to restore it to a natural habitat.  Perhaps his favorite view was from his dining room bay window overlooking the patio filled with bird feeders. At the river, he re-established the pond at Hardin Park by rebuilding the beaver dam, which helped to restore the natural habitat of the pond environment.

Jim loved working with his hands.  The homes where he and Jeanne lived were under constant remodel over the years as he took on new additions and renovation projects. Jim’s woodshop always had signs of building new furniture and furniture restoration activity.  The winter months would find his desk covered with models or designs for upcoming creations. The woodshop also doubled as a toy factory, as Jim made countless puzzles and toys for his children and grandchildren.

Jim loved the arts.  During his college days, he fell in love with ballet and opera. He was a supporter of Regional Arts Alliance, the Post Playhouse, Nebraska Public Radio, the Public Broadcast System, and Gordon High School performances here in Western Nebraska.  He and Jeanne completed one of his bucket list items when they went to New York City for five nights at the Lincoln Center.

Jim loved his friends. He had lifelong friends which began on sailboats and ski slopes, professional friends from the laboratories where he worked, and his best friends, those friends and neighbors he met and grew old with here in Nebraska.  He enjoyed traveling to visit family across the country, with stops here and there along the way to see longtime friends.

But more than anything, Jim loved his family. His roots to his family ran strong and deep in his relationship with his parents, John and Charlotte, and his brothers, John and Bill and their families.  He and his partner in life, Jeanne, were seldom far apart.  He had warm relationships with Jeanne’s mother Helen, and siblings Walter, Mary Jo, Martha and David and their families.  He loved his children, Dan, Rachel and Rebecca, teaching them about farming, wood working, photography, science and Mr. Fix-it skills. Jim was proud of their accomplishments and the families they built, welcoming son-in-law Jason and daughter-in-law Lisa to the family.  He loved his grandchildren, Audrey, Kate and Nathan Fraser, and Henry and Lily Walter, often traveling for holiday visits and to see live musical and stage performances.  He traveled to Cuba three times over a span of 35 years, his final trip traveling with his two brothers and nephew Scott in 2015.

A Celebration of Life Service is being planned to occur during the summer of 2021.

Donations may be sent in care of