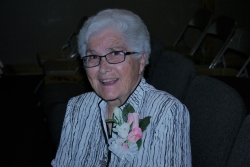 Mary Jean was born November 24th, 1926 to Olin Arthur and Inez Reike Ravenscroft in Blairstown (Benton County), Iowa on the family farm.  She had six older brothers:  Willis, Myron, Francis, Donald, James, and Calvin; and a younger sister Ruth was born in 1931.  In 1930, Olin and Inez Ravenscroft and their growing family migrated from Iowa to the Sandhills of Nebraska.  During the first ten years, they lived somewhat of a nomadic life, leasing and living on several ranches.  These included the “Black Place” 13 miles southwest of Dunning on Wild Horse Flat in Logan County, the “Haney Place” near Hyannis in Grant County, the “Stinsman Place” and the “Sillesen/Morgan Ranch” (both near Arthur in Arthur County), and the “Box T/Christopher Ranch” west of Brownlee in Cherry County.  Living conditions on these leased places during the Depression years of the 1930’s was often crowded and primitive.

In 1940, Olin Ravenscroft and his family were offered opportunity to purchase the John Bachelor ranch on Boardman Creek in Cherry County.  Finally, their hard work, sacrifice, prudence, and providence converged, and the Ravenscrofts had found a home at last.  The new ranch was called the Cross O.  Jean was 13 years old when they moved there, and it was “home” to her until her marriage at the age of 23.

Jean and her brothers rode horseback to country schools during her elementary years.  She remembered being 15 years old and hearing about the December 7th, 1941 bombings at Pearl Harbor on a car radio, while coming home from visiting neighbors.  Three of her brothers, Myron, Francis, and Donald served in the military during World War II.

Jean fulfilled her early high school education through home school correspondence courses, and then boarded in Valentine for her last two years, graduating in 1945.  She went to the University of Nebraska for two years, majoring in music. Though she loved to sing, she soon realized her true calling and went to the Mary Lanning School of Nursing in Hastings for three years, graduating as a Registered Nurse in 1950.

While in nursing school, she got horribly sunburned one summer day, to the point of actually feeling ill.  Two weeks after the sunburn experience, she developed a terrible headache and stiff neck one night while working.  The next morning, she went to church with a friend, but could hardly stand the sitting, kneeling, and standing routine.  On Monday morning she went to a doctor.  When he asked her to bring her head down to her chest or lift up her knees, she couldn’t respond.  She was put in isolation, and for three days she lay there nearly totally paralyzed, especially from the waist down.  She did a lot of praying and singing during that time, and committed her life to the Lord’s service, no matter the outcome of the polio.  “I will serve you from a wheelchair; I am yours.”  From that point on Jean had great peace, and believes her healing began.  By day five she was moving again, though weak and with great effort.  On day ten they let her get on a bus and go home to the ranch.  “Home” on the ranch was a healing balm, and she regained her strength to get back to school and only miss three weeks of training.

Jean had first met her husband-to-be while attending the University of Nebraska in 1947.  John Adam McCrory was a young veterinarian from Greenville, Alabama who had served in the Army during World War II.  He had come to Lincoln to get his Master’s Degree to further his expertise as a veterinarian.  Jean Ravenscroft and John McCrory were married March 19th, 1950.

John McCrory, DVM and Jean Ravenscroft McCrory, RN pursued their chosen professions in both Nebraska and Alabama for the next several years.  They had four children:  Julie, born in 1952; John in 1953; Carol in 1957; and Joy was born in 1961.  While living in Alabama, John McCrory died unexpectedly on January 13th, 1963.  Jean’s desperate prayer was, “Lord, I can’t raise four children by myself.”  She heard a nearly audible voice in her spirit say, “You won’t be alone.  I will be with you.”  Her Lord Jesus was her strength and peace to carry her through.

As the spring wore on, and details and loose ends were tied up, Jean decided to move back to Nebraska after school let out.  Her brother Willis offered her and her four children an empty house on his Three Bar Ranch south of Nenzel.  The ranch would be a good place to raise her family, with the benefits of country living.

Jean’s brother Willis and his wife Marjorie were acquainted with a ranching neighbor whose wife had died in 1964, and they introduced Jean to Royal McGaughey.  Sparks flew, and Royal and Jean were married on December 28th, 1968.  Jean and her four children moved to Royal’s ranch south of Eli, Nebraska, four miles south of the Niobrara River.  The kids attended schools in Valentine, Merriman, and Gordon through the years.  The ranch was “home” until 1991, when it was sold, and Royal and Jean moved to a townhouse in Gordon.  Royal died in 2002.  Jean continued living in Gordon until 2015, when she moved to an apartment house in Valentine.  Her sister, Ruth Holm from North Platte, had lost her husband also, and she lived in an adjoining apartment.  For several years both ladies went to Arizona to spend about three months each winter.

Jean was a very good nurse, and she influenced many others to also become nurses.  This includes all three of her daughters, one granddaughter, and at least one niece. Through the years Jean nursed in hospitals in Alabama and Nebraska, she assisted her veterinarian husband, and gave medical advice and assistance to all her neighbors, friends and family.  Jean delivered one neighbor’s baby in a car on the way to the hospital, and she rode with another who did barely get there in time. She taught Red Cross first-aid and CPR and was on the Gordon Hospital Board for many years.

Jean has taken her Christian commitment very seriously and has been an outstanding prayer warrior.  She has had a “hotline to Heaven,” knew how to use it, and has prayed her friends and relatives through many dilemmas.  Sharing the gospel of Jesus Christ for whom she lived, in word and deed, many lives were influenced by her teaching Sunday School, Vacation Bible School, and Bible studies.  Rest in Peace, Grandma Jean.

Visitation will be held Monday November 30, 2020 from 5 to 7 PM (MT) at Chamberlain-Pier Funeral Home, in Gordon and Tuesday at the Berean Bible Church in Valentine, from 6 to 8 PM (CT). Family graveside services will be held at Mount Hope Cemetery in Valentine.

A memorial has been established for the Tri-State Cowboy Museum in Gordon, the One Way Mission of Kilgore or Valentine or the Berean Bible Church in Valentine and donations may be sent in care of Chamberlain-Pier Funeral Home, PO Box 366, Gordon, NE 69343.