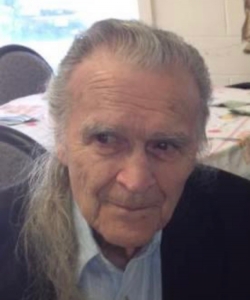 Donald D. Ruleaux, 89, of Chadron, NE passed away peacefully at his home with his daughter Mary, son-in-law Duane, and his friend Lynne by his side.

Don was born in Martin, SD on June 19, 1931 to a French Canadian Native American father and an English Mother. He spent his early years growing up on the Pine Ridge Indian Reservation. When Don was entering the fourth grade, the family moved to Gordon, NE, where he attended school and graduated in 1950. His post-secondary education includes Kansas City Art Institute, a BA in Art Education from Chadron State College, MA in Art Education from Arizona State University, and George Washing University in Washington DC.

His teaching experience spans several decades and includes grade schools, Jr. and Sr. High Schools and colleges and universities in Gering, NE; Spearfish, SD; Lead, SD; Curtis, NE; McCook, NE; Hastings, NE; Vermillion, SD; and Chadron, NE. He had several other related work experiences, the favorite of these working as an artist/draftsman for the movie Lakota Women, filmed in SD. His exhibitions and awards number over 100 and are too numerous to mention individually. One the most prestigious was the Nebraska Governors Award of Excellence in Art Education. Don served in the United States Navy and the Army Reserves.

In 953, Don married Betty Lou VanBuskirk of Rushville, NE. T this union they added 6 children. In 1999, Don and Betty moved back to Chadron to retire. They spent their time gardening and enjoyed travelling around the country visiting their children and grandchildren. Don continued his artwork and did several silverpoint drawings of residents of Chadron which he then gifted to them. Don also did silverpoints of his wife, children, and grandchildren.

Don was preceded in death by Betty, his wife of 60 years, his parents, one brother, six sisters, and many aunts, uncles, and cousins. He is survived by his children: Frank (Lisa) Ruleaux, Donald (Ardeia) Ruleaux, Mary (Duane) Hall, Francelia (Larry) Iverson, Beau (Sandy) Ruleaux, and Robert (Kari) Ruleaux; and numerous grandchildren and great-grandchildren.

A memorial service will be held at a future date, followed by a celebration of life.