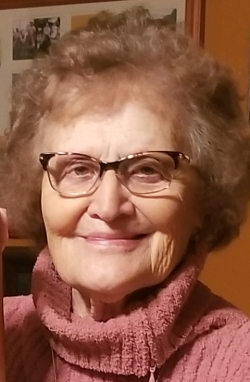 Lorraine (Greenwood) Thomas was born October 28, 1936 to Claude H. and Mary (Bourne) Greenwood in Rushville, Nebraska. For almost two months, she was simply called “Baby Girl” because her Grandpa Bourne was in Virginia and he said “Don’t name that baby girl until I get home.”  As Christmas approached, family members wrote their favorite names on a piece of paper and put them in a hat.  For fun, Lorraine’s dad put the name “Suzie Running Hawk” on his paper and of course, that was the first name drawn.  Her older brother, Dale, would affectionately call her “Suzie” for the rest of his days.  Eventually, she was named for her maternal grandmother, Saida and called by her middle name, Lorraine.  Lorraine grew up with brothers Dale, Harold and Jerry on the family ranch southeast of White Clay.  She attended elementary school at District 129 Extension school by White Clay and went to high school in Rushville.  Softball games and rodeos were among her favorite activities.  In 1953, she won the Nebraska High School Rodeo Queen contest.  She later went on to win rodeo queen contests in Sheridan County, Ardmore Rodeo (SD) and the Annual 4th of July rodeo in Crawford.  Lorraine graduated from Rushville High School in 1954.  After graduation, she went to summer school for 12 weeks to get her teaching certificate.  That fall at the age of 18, she got her first teaching job in Denby, SD.  After teaching for three years, Lorraine decided to return to school to complete her formal education.  She graduated from Tabor College (Hillsboro, KS) in 1962 with a degree in Elementary Education and minor degrees in Psychology and the Bible.  Over the years, she would teach at various schools including 23 years at Pine Ridge Elementary on the Oglala Sioux reservation.  Teaching was a passion for Lorraine.  She genuinely enjoyed her students, investing time and love into the lives of countless young people and working hard to help them succeed.

Lorraine was a people person.  She was a devoted mom and grandma.  She loved her family dearly and made many personal sacrifices on their behalf.  She loved visiting with family and friends.  She was always making phone calls to see how someone was doing or just to catch up on the news.  She was well-known for her poems, jokes and funny stories.  Lorraine felt extremely blessed to be able to spend her life living on the ranch she loved, spending time in the outdoors and working with horses and cattle.  She also enjoyed fishing and her bowling league.

A very significant event took place in Lorraine’s life in 1955.  She became good friends with Delores Archeene who with her husband, Arnie, had come to serve as the first missionaries to the newly built Extension Community Church.  Delores started going to rodeos and ballgames with Lorraine and right away Lorraine noticed a difference with her new friend. Lorraine said, “I watched Delores like a hawk and she never changed.  She was the same at the rodeos and ballgames as she was at church.”  One Sunday Delores spoke at church and she said, ‘If you break your arm, you go to a doctor, if you have a toothache, you go to a dentist and if you have a spiritual need, you go to the Lord Jesus.”  Those words shook Lorraine.  She was 19 years old and had everything that should have made her happy, but she knew something was still missing.  Despite going to church and knowing who Jesus was, she realized she had a spiritual problem because she had never surrendered her life to Him.  That night she crawled out of bed, knelt down and prayed, “Lord, I give my life to you.”  Those seven words of complete surrender to her Lord and Savior Jesus Christ would transform and guide her for the remainder of her life.  Lorraine was an instrumental spiritual leader in the lives of many and prayed for family members and friends daily.  Throughout the years, she served as Bible camp counselor, Sunday School teacher, VBS teacher and Kids Club Leader.  She served as a board member for her church, New Christian Center in Rushville and for the Oyate Concern Christian School in Oglala, SD.  She knew this earth was not her forever home.  She liked to say, “I’m gonna live until I die and then I’m really gonna LIVE!”

On Monday, December 21, 2020, Lorraine passed away at home on the ranch she loved, cared for by family who adored her.  She was preceded in death by her parents and her three brothers, Harold, Dale and Jerry.  She is survived by daughter, Chris (Doug) Masat and son, Steve (Liz) Thomas; grandchildren, Brian (Steph) Masat, Cori (Ryan) Hamilton, Jessica (Zach) Erickson and Emily Thomas, great-grandchildren Othaniel Erickson, Zoey and Gemma Masat and many other beloved family members and dear friends.

Graveside service will be held Saturday, December 26th at 10:00 AM at the Fairview Cemetery in Rushville, Nebraska with Pastor Jason Funk officiating.

The family asks that memorials be given in Lorraine’s honor to: New Christian Center or Oyate Concern Christian School. Memorials can be sent to Chamberlain Chapel, PO Box 970, Chadron, NE 69337.

Chamberlain Chapel of Chadron is in Charge of arrangements.