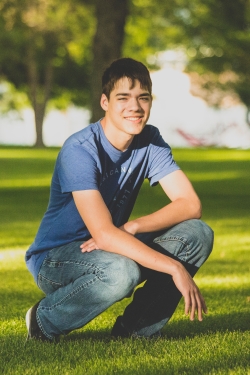 Jonathan Michael Sherer was born on September 27, 2000 in Fredericksburg, VA to Robert Michael Sherer, Jr. and Malinda Johnson (Sherer) Smith. He passed away in his home in North Platte, NE due to complications from his Type 1 Diabetes on December 27, 2020.

Jon, as his Grandpa Doyle nicknamed him, was always a smart boy. He learned things so quickly, we started him in school at age four. Jon’s stepdad Ken helped Malinda raise Jon and his brother Joshua from ages two and three. That influence led to a lifetime love of baseball for Jon. He was a pitcher, mostly, but he could play any position on the field. When he was not pitching, he would often cover first base. One of his proudest accomplishments was helping his baseball team win the district title his Senior year. Outside of baseball, he enjoyed bowling and golf. He liked to be busy. Another great love and passion of his, was music. He sang so beautifully! All four years of high school, he was selected for Western Trails Conference and High Plains Honor Choirs. Even with all his extra-curricular activities, he managed to make the honor roll.

On November 1, 2016, he was diagnosed with Type 1 Diabetes. Even though he thought it meant he could not follow his dream, he graduated from GRHS in 2018 and decided to pursue a degree in Culinary Arts, which he had a great talent for. He could make anything you wanted, and it tasted amazing. He was currently working as a chef in North Platte while waiting to finish his degree in the spring.

Jonathan was preceded in death by his great-grandparents, Doyle and MaryBell Johnson.

A Celebration of Life will be Sunday, January 3, 2021 at the Gordon City Auditorium. A memorial has been established in Jonathan’s name and donations may be sent in care of Chamberlain-Pier Funeral Home, P.O. Box 366, Gordon, NE 69343