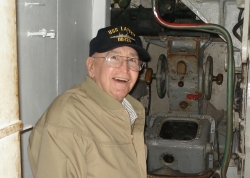 Jack spent much of his life in the Gordon area. He left his senior year of high school to join the

Navy during WWII. After returning from the Navy, he married his high school sweetheart, Dena Hooper. Together they split their time between a ranch out of Gordon and a house in town.

After retiring from ranching they moved to Ceresco, NE and later to Lincoln where their daughter Teri, and husband Jerry watched closely after them the last few years.

Jack loved dancing with his wife, playing cards, giving bronco rides (on his back) to his grandchildren when they were small, and traveling with family. Many trips involved camping and fishing. Two of his favorite excursions were to Charleston, SC where he paid a visit to his old Navy ship the “USS Laffey,” and to Hawaii, where he experienced Pearl Harbor and Sailplaning.

He was preceded in death by his wife of 73 years, Dena (July 30, 2020), his parents; Claude and Blanch Drury; in-laws Nuck and Sylvia Hooper; Bernard and Wilma Hooper, Kenneth and

Celebration of Jack and Dena’s Life will be held at a later date.