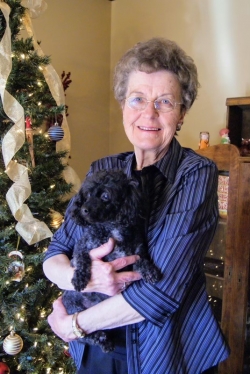 On June 16th, 1931, Paul and Eva Thorsen welcomed their fourth child and second daughter on the family farm southwest of Gordon, Nebraska.  They named their baby girl Dorothy Alice.  In addition to her parents, she was welcomed into the world by her two older brothers, Don, Dwight, and her older sister, Esther.

Dorothy attended country school through the 8th grade and in 1945 started her freshman year at Gordon High School.  She eventually graduated with the GHS class of 1948. In the spring of 1948, Dorothy enrolled at Chadron State Teachers College and began work on a teaching certificate which she completed in 1950.  Following her teacher education, Dorothy taught in several country schools east of Gordon.  In the early 50s, she enrolled in Midwest Bible School and it was while attending Bible School that she met a dashing young man named Morey Bruce. The two began a courtship which eventually led to engagement and marriage on May 17, 1953.

Over the next 10 years, Morey and Dorothy were blessed with 3 children, Merry was born in 1955, Sherry in 1959 and Todd in 1963.  Just before the birth of their son Todd, the family moved to eastern Nebraska and then eventually back to Ogallala, Nebraska. In 1971, the Bruces moved back to Gordon when Morey became manager of the local Coop Elevator.

Dorothy spent her life serving her husband, children, and her church.  She loved preparing meals and perfected the art of baking dinner rolls.  She truly was the quintessential helpmate.

In addition to Dorothy’s homemaking ability, she was blessed with a love for music. Singing came natural to her and for over a half-century she and Morey shared a music ministry together in every church in which they attended.

About 5 years ago, Dorothy began to display signs of dementia and her health slowly began to decline.  She most recently resided at the Gordon Countryside Care and passed away on Thursday, January 14th, 2021.

She is preceded in death by her parents, her siblings and her husband Morey Bruce.

When all is said and done, it is safe to say that Dorothy Alice Thorsen Bruce lit up her world for 89 years with genuine kindness and her infectious smile.

Funeral services were held Tuesday, January 19, 2021, 10:00 AM at the Church of God with burial in the Gordon Cemetery. A memorial has been established and donations may be sent in care of Chamberlain-Pier Funeral Home, PO Box 366, Gordon, NE 69343.