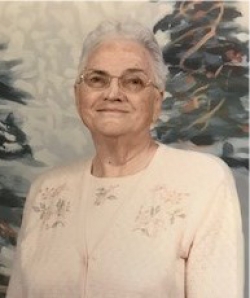 Xoa Lou Busick of Gordon, Nebraska passed away in the morning of January 28, 2021 at Gordon Countryside Care, she was 89 years old. She was born on August 27, 1931, in Los Angeles, California to Xenophon Bryan and Mary Lucille Thompson Bryan.

Xoa Busick worked at the Gordon Hospital for approximately 10 years retiring in 1995.

Xoa Busick was a (long time) member of Presbyterian Church in Gordon and was very active in the church community. She volunteered to serve on various committees and donated many knitted and crocheted hats and mittens. She enjoyed playing bridge and spending time with friends.

Graveside Services will be held at 11:00 AM, February 2nd, at the Gordon Cemetery with Reverend Patricia Stetson-Warning officiating. Cremation rites have been accorded.