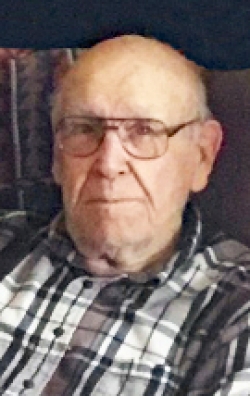 Ernest Joseph Haberman was born Tuesday, March 19, 1935 to Louis and Margaret (Potts) Haberman at Fordyce, Nebraska. He grew up in Hartington, Nebraska. While attending Holy Trinity Catholic High School he excelled in football and basketball, graduating with the class of 1953. Following graduation, Ernie enlisted in the US Navy, proudly serving from 1953-1956.

Ernie married Maxine Kozak May 16, 1964 at Sacred Heart Catholic Church in Yankton, South Dakota. They made their home in Rushville, Nebraska while raising their three daughters. Ernie’s career was spent working for Nebraska Public Power District. He began as a journeyman lineman in 1963 in Norfolk, becoming line foreman in 1973.  When he retired in 1995, he and Maxine moved to Tyndall, South Dakota. Here he was able to work on his golf swing. Ernie’s hardworking ethic wouldn’t allow him to quit work entirely, as he worked as a maintenance worker for an apartment complex and grounds keeper at the local golf course.