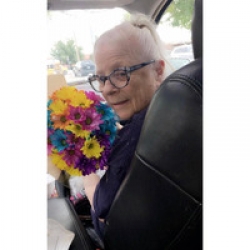 Lois Marie Connell Shedeed Linehan was born February 18, 1945 in Cloquet, Minnesota to Gene and Lorna (Richardson) Connell. She grew up in Minnesota and South Dakota and attended elementary and middle school in Oelrichs, South Dakota. Her father, Gene, went to work for the U.S. Forest Service and the family lived in Hill City from 1959 to 1963, where Lois graduated high school in 1963. While in Hill City she met Fred Shedeed who was helping to build the new school.

Lois and Fred were married September 10, 1963 in Hot Springs, South Dakota. They eventually moved to Gordon, Nebraska, Fred’s hometown. Kim Andrea was born in Gordon in May of 1965, followed by Amy in 1974, and Jennie in 1977. After a lengthy illness, Fred passed away in April, 1981. Lois and the girls moved back to South Dakota. She loved working at Pamida and Fall River Floral in Hot Springs. She said it always made her feel good to bring flowers to someone. Lois remained in Oelrichs after retirement.

She married Jim Linehan in 1998 and they resided in Oelrichs. They traveled extensively with their RV to such places as Oregon, North Carolina, and North Dakota enjoying themselves. Jim became ill and died in 2014. Lois enjoyed time at casinos with friends and family in her later years.

Lois passed away peacefully at home on February 12, 2021, just 6 days before her 76th birthday. Rest in peace dear sister and best friend.

Services will be held at a later date