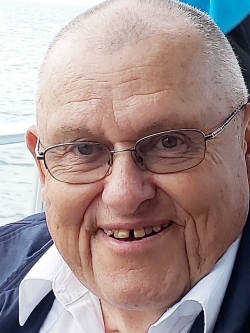 Virgil Myrl Elsberry passed away from complications from Covid-19 on Tuesday, February 9, 2021 at Mission Regional Medical Center in Mission, Texas at the age of 81.

Virgil is survived by his wife, Judi Elsberry; children Wayne Elsberry and wife Mai of San Antonio, Texas, Beth Ann Brandt and husband David of Grand Island, Nebraska; step-children Valerie Oakleaf and husband Mike of Portland, Oregan, Venessa Gottier and husband Kevin of Albion, Nebraska, and Veronica Cangiamilla and husband Mitch of Sheridan, Wyoming; siblings Ronald Elsberry, Lois Elsberry Urwiler, Sharon Elsberry Boysen, Eugene Elsberry, Norman Elsberry, and Janice Elsberry Fox. He had many grandchildren and great-grandchildren that he loved spending time with. He is preceded in death by his parents, Myrl Eslberry and Arlene Lichty Elsberry of Page, Nebraska, wife Alice Sandoz Elsberry of Gordon, Nebraska, and an infant sister. Virgil was born on August 6, 1939 on the family farm near Page, Nebraska. He graduated from Orchard High School in Orchard, Nebraska on May 5, 1956 and attended Miltonvale Wesleyan College in Kansas for one year. There he met Alice Sandoz and they were married February 14, 1959. They were baptised together the following September. Over the next few years, the couple added their 2 children to their family. His children remember him as a determined father who encouraged them to love the Lord, work hard, and take time for family. Virgil ranched for over 40 years in Sheridan and western Cherry Counties. Virgil’s wife, Alice passed away in January of 2001. He married Judi Gowan Zuver on July 28, 2001. Virgil and Judi enjoyed many adventures traveling the country and doing mission work together. Virgil was accomplished at wood working and often made beautiful pieces of furniture, pens, bread boards, coasters, and toys for his friends and family members. He loved fishing and spending time outdoors from a very young age. His enjoyment of ranching was evident in his thriving gardens later in his life. He was a kind individual who loved Jesus and had a passion for others to come to know Him. He made it a priority to send his children to Bible camp as well as many others because he accepted Jesus into his heart at a Bible camp when he was a teenager. He also had a heart for missions. He was an active and dedicated member of Wellspring (formerly Gordon Gospel Chapel) in Gordon, Nebraska and he attended Faith Baptist Church in Mission, Texas where he and Judi spent their winters.

The family would like to thank the doctors and nurses at Mission Regional Medical Center for their dedicated care. A memorial will be established for funds to go toward mission work.