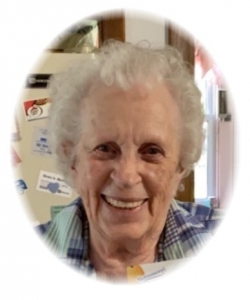 Lorainne Alexander, age 88, of Gordon, passed away at Gordon Memorial Hospital on February 9, 2021.

Lorainne was born in Indianapolis, Indiana on June 25, 1932, to Milton and Vae (Walls) Sanderfer.  Her family came to Gordon by covered wagon with the Scamahorn Colony. Lorainne attended Gordon High School, graduating in 1950.

She was united in marriage to Donald W Alexander in June of 1951. To this marriage 5 children were born:  Mark, Kim, Jeff, Marty, and Kris.

Lorainne was active in the community. She received the Curved Bar Award, the highest reward in Girl Scouts, she was also a Cub Scout Den Mother, and active in Eastern Star.

She loved animals, enjoyed landscaping and lawn work.  She especially enjoyed sewing and making quilts for her grandchildren.

Lorainne was preceded in death by both parents, her husband Don, her son Mark and grandson Brian (Alexander) Gwynn, and friend Dale Hull.

Memorial services will be held at a later date. A memorial has been established for C.A.R.E. and donations may be sent in care of Chamberlain-Pier Funeral Home, PO Box 366, Gordon, NE 69343.

More in this category: « Patricia "Pat" Rawles George B. Jones »