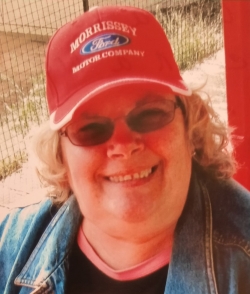 Connie was born July 7, 1958, in Gordon, Nebraska to Raymond and Joy (Holeman) Weimer. She received her early education in country schools near Merriman and later graduated from high school in Martin, SD in 1976. Connie attended Chadron State College for a few years before returning to Martin where she worked in the laundry department at the Bennett County Nursing Home and Hospital. Later in life, Connie worked for Alco in Valentine as well.

Connie was united in marriage to Bryce McNare on August 25, 1990 in Batesland, SD. They made their home in the Sandhills of Nebraska.

She enjoyed reading, sewing, and quilting. Connie was very outgoing and friendly.

Connie was a member of the Quilt Club in Valentine and Victory Bible Church in Merriman.

She was preceded in death by her parents and brother, Tim Weimer.

Memorial contributions may be made to the Gideons or Mert Youth Camp.

Sandoz Chapel of the Pines is in Charge of service arrangements. Online obituary and condolences may be left at www.sandozfuneralhome.com.

More in this category: « Barbara Landreth Judith A. Taylor »