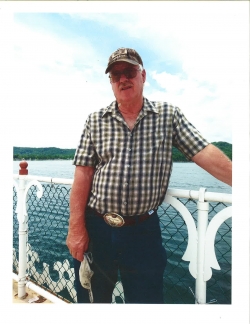 Hunting, fishing, hiking, camping - anything to do with the outdoors was Wayne’s passion. That is exactly what he was doing on a sheep hunt with Joey when he became ill with Covid-19 and passed away August 19, 2021 in Albuquerque, NM. He was born December 26, 1954, to Charles and Barbara Krotz, in Rushville, NE. He was the fifth of six children. He grew up on the family farm northwest of Rushville. He attended a one room school house at District 44 through 8th grade and graduated from Rushville High School in 1973. He joined the Anny National Guard in 1973 and was honorably discharged in 1979. Wayne was very proud to have served his country. In 1975 he took a taxidermy class and taxidermy became one of his hobbies. He worked for Nebraska Beef as a meat cutter, Sheridan Livestock in the yards, Gordon Memorial Hospital in maintenance, Otte Packing as cleanup and butcher, and Security 1st Bank on their mobile bank. While square dancing at District 44 he became reacquainted with a classmate, Rena Bishop and they married in 1981. Rena was the love of Wayne’s life and they were best friends, doing nearly everything together. They purchased their first house in Rushville in 1983. Together they made it a home, raising their three boys- Gregory John 1983, Dennis Wayne 1985, and Joseph William 1989. He enjoyed watching the boys play sports and teaching them to fish and hunt. In 1997 he graduated Chadron State College with a BA in Mathematics. He learned carpentry and electrician skills and gutted the home in 1988, and remodeled the upstairs in 1999. After Rena graduated from nursing school in 2009, his siblings asked them to move to the farm to live and take care of their mom, Barbara. In 2012, they were able to purchase the home Wayne grew up in, and after the passing of his mother in 2014, he inherited his 1/6 of the acreage.

Rena and Wayne both retired March 30, 2017 and have enjoyed traveling the country. Their very first trip as retirees was 58 days in Canada and Alaska, and enjoyed an Inside Passage Alaskan cruise in 2019. They’ve done a lot of camping and adventuring throughout the Black Hills,. CO, NM, AZ, NE, WY, UT and MO. He was always excited at the opportunity to spend time camping and fishing with his three grandsons- Charlie, George, and Benjamin, his pride and joy. He enjoyed turkey, elk, deer, antelope, ibex and big horn sheep hunts with his boys in NE, WY, AZ, and NM. Wayne was always eager to go shed hunting and exploring the woods every spring. He was looking forward to his hunts this fall, two hunts for himself and more hunts with Joey, in NM and AZ,.

As a loving husband, father, and grandfather he will be deeply missed by his wife Rena (6 weeks shy of 40 years), son Greg and Nikki, son Dennis, Melissa, and Charlie, and son Joey, Jessica, George, and Benjamin. He was preceded in death by his parents Charles and Barbara Krotz and his brother Melvin.-

Celebration of Life will be September 11, 2021 at 10:30 am at St Mary’s Holly Episcopal Church, located 11 miles north of Rushville on Hwy87. Masks will be required in the church. If you prefer to not wear a mask, you are welcome to join the graveside service in the Holly Cemetery at 11 :00 am.

Dress will be casual, please feel free to wear your camo in memory of Wayne. His cremains will be scattered in his :favorite camping and hunting spots as well as on the farm. In lieu of flowers donations can be made to NWTF and RMEF, as Wayne believed in the importance of conservation.