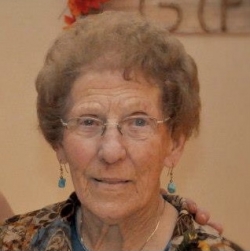 Evelyn was born on May 4, 1924, to the union of Herbert and Mary (Ronfeldt) Tech in Tuthill, South Dakota.  She received her formal education from Bennett County High School in Martin, South Dakota.  Shortly after graduation, she married Jim Gwynn on January 23, 1944 and to this union, two children were born: Blaine and Tina.

Evelyn was a member of the First Presbyterian Church, Eastern Star and an avid card player in numerous clubs.  She enjoyed walking, gardening, cards, arts and crafts, sewing, baking and, above all else, spending time with her grandchildren.

Evelyn led by example.  There was never a job too large or too small that she would not tackle.  She was a strong, determined and fiercely dedicated woman.

Evelyn was preceded in death by her husband, James “Jim” Gwynn; one son, Blaine Gwynn; and, one daughter, Tina (Gwynn) Mills.

A special thank you to the wonderful doctors and nurses at Gordon Countryside Care who provided invaluable care.

A graveside service will be held at 10:00 a.m. Saturday, September 11, 2021, at the Gordon Cemetery with Pastor Patricia Stetson Warning officiating.

The family suggests memorials to the Eastern Star of Gordon and donations may be sent in care of Chamberlain-Pier Funeral Home, PO Box 366, Gordon, NE 69343.