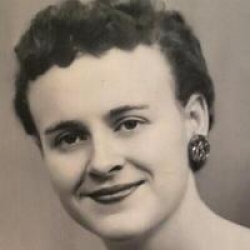 Beverley Jean (Reed) Barnes, daughter of Frank and Lennis Reed, was born April 10, 1940, in Alliance, Nebraska. She passed from this life on September 16, 2021, at the age of 81 years, 5 months, and 6 days. Her childhood days were spent in Gordon, Nebraska, until she was 9 years old, when they moved to the family farm right outside of Rushville, Nebraska.  She attended Grade School in Gordon, Nebraska and High School in Rushville, Nebraska where she graduated in May of 1958. During her High School years, she worked at a coffee shop where she met Ferril, a wheat harvester from Texas who was cutting wheat for her dad.  They corresponded by letters and were united in marriage on December 7, 1958, at the Methodist Church in Rushville, Nebraska.  The couple remained in Rushville where Beverley became a stay-at-home wife and to this union they welcomed 3 children, Darrell, born in 1959, Donna, born in 1961, and Lynn, born in 1963.  Shortly after the birth of Lynn in 1963, the family moved to Ferril’s hometown of Vernon, Texas.  In 1968 they moved to Arnett, Oklahoma, where they bought and ran the Plains Creamery Distributorship, and they also ran a restaurant. In 1973, they welcomed their 4th child, Tonja to the family. In 1975 Beverley started her career as a cook for Arnett Public Schools, where she worked until her retirement in 2000. Beverley and Ferril also owned and operated the Gage Quick Shop for 10 years. Beverley was baptized on April 9th, 1950, at Rushville Methodist Church. She attended the First Baptist Church in Arnett and enjoyed cooking youth noon meals on Wednesdays and helping with funeral dinners. Beverley enjoyed cooking for family gatherings and spoiling her grandchildren and great grandchildren. She loved her beauty shop appointments and shopping on Amazon.