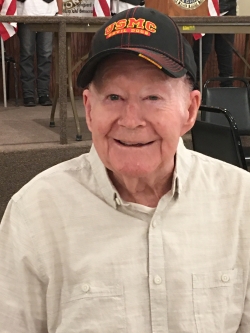 Robert Melvin Reutter (Bob) left his earthly home to be with his Heavenly Father on September 26, 2021.  He was born on August 17, 1927, his parents were George and Marie Reutter. They moved from Tennessee shortly before his birth to Detroit, Michigan where he spent his youth.  He graduated from East Detroit High in 1945 and was drafted into the Marines in November of 1945.  While stationed in Arlington, VA he met Hazel Norgard who was also in the Marines. They had to be careful about dating as she out ranked him, they were married on April 25, 1947. Bob was very proud of his service to his country.

Bob and Hazel moved to Crawford, Nebraska after being discharged and joined Hazel’s brothers in running Norgard Hatchery.  They welcomed three children into their family, Kristine, Keith, and Kenneth. They lived in Crawford until 1962 and moved to Gordon, Nebraska which was his home until his death. While in Gordon he worked for Magowan Grain Company becoming part-owner in the early 70’s. They sold the company in 1993 at which time Bob and Hazel spent the colder months in Laughlin, NV in their RV, which gave Bob more time to golf (just three more holes).  He also enjoyed working in his garden, his flowers were beautiful.  Hazel passed away in 2001. On December 4, 2004, he married Clara Hardin, they continued to travel in the RV while their health allowed it.  Clara passed away in 2018.  Bob continued to live in his home with the help of his daughter and son-in-law, enjoying golf and gardening.

At age 94 he was preceded in death by many family members and friends. He is survived by his daughter Kristine Brice, Gordon, NE, and son Keith Reutter (Wanda), Salem, MO, four grandchildren, eight great grandchildren and many nieces and nephews.

Funeral services will be held Friday, October 1, 2021, 10:00 am at the Grace Lutheran Church in Gordon, NE. Burial will be in the Gordon Cemetery.

A memorial has been established for Quilts of Valor and donations may be sent to Chamberlain-Pier Funeral Home, PO Box 366, Gordon, NE 69343.