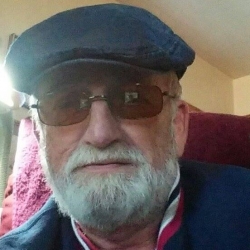 Ross Young, 80, of Rushville, Nebraska passed away on July 24, 2021 at Gordon Countryside Care.  Ross was born February 3, 1941 in Minnesota to William and Dorothy (Hines) Young.  Ross was the oldest of three children growing up in Pipestone and Owatonna, Minnesota.  He graduated from Owatanna High School in 1959. After high school Ross enlisted in the Air Force where he was a tail gunner on B-52 bombers during the Cuban Missile Crisis.  After the service Ross met and married Judy and to this union 2 children were born.  Over the years Ross worked a variety of sales jobs in Minnesota.  In 1981 Ross and Judy purchased a Montgomery Ward’s Catalog Store in Yankton, SD.  Ross and Judy moved back to Minnetonka, MN in 1995 where he worked as a school bus driver and then as a bus driver for the city of Minneapolis.  In 2003 Ross and Judy retired, sold everything, bought a motor home and traveled the country for 3 years, eventually landing in Rushville.  They managed the Rushville Legion for 3 years and then actually retired.  Ross spent his last 4 months at Gordon Countryside Care.  He enjoyed meeting the staff and was appreciative of the great care he received.

He was proceeded in death by his parents William and Dorothy Young.

Ross donated his body to the University of Nebraska for teaching or research.  Private family services were held.