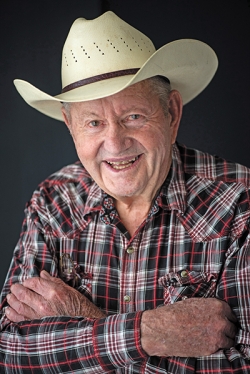 Gary M. Frye, age 86, passed peacefully into the arms of his Savior Jesus and was greeted by his wife Kaye on the morning of Monday October 4th, 2021. Gary was welcomed into the world by Edward & Jessie (Thompson) Frye and brothers Ted & Bruce, at the sod house on their ranch north of Arthur, NE. His grade school years were spent riding a horse to school with Doris Wilson. They shared great memories of those experiences.

Gary attended Arthur High School where he played basketball and excelled in academics, eventually graduating with honors. He’d spend his mornings at school and afternoons helping on the family ranch. During his Sophomore year, another classmate, Kaye Jensen, cooked a meal for him in a home ec. It would be his last, first meal made for him by her, he knew he couldn’t let her get away.

Gary enlisted in the army on January 3rd,1957 and served until April 2, 1959. He and Kaye were married on his 10 day leave, December 23, 1957 at the Arthur Baptist Church. They spent those remaining “army years” in Manhattan, KS. There they formed life long friends, Tom & Barb Barlean and Floyd & Elaine Bailey. These couples enjoyed several visits to each other’s home states over the years and embarked on other traveling adventures together.

Gary & Kaye purchased their home ranch 26 miles north of Ashby in 1959. The trail roads were a challenge to move trucks of cattle and household items, Dad often told the story that a neighbor stopped in to greet them to the area and they had put all their shop tools & equipment in the living room.

On one of the trips to Gordon they noticed a new building being constructed. Next trip to town confirmed it was the future home for Pleasant Point Community Church. For many years, Gary served as a board member and it became his forever church home. Gary and Kaye hosted countless missionaries on furlough and forged lifelong friendships with those friends. In the early 60’s, Pleasant Point Church was working with a new TV station, KDUH out of Hay Springs. He was part of a quartet called Streams of Living Water, singing with Willis Orr, Eb Strasburger and Norman Hamilton; with Willis Mouttet providing the message.

In 1960, their first child Jecca Rene was born 5 weeks early, disrupting the hay season that year.  In November of 1963 their son Gregory Jay was born.

Gary worked diligently to improve the ranch he purchased. He put in two circle irrigation systems and acres and acres of trees. Gary was also instrumental in being on the Cherry County Commission for Zoning.

In later years, he and Kaye spent many years completing a large hay contract, with the help of their grandkids, south of Merriman at the Churn Ranch. He always enjoyed a clean cut field and rows of beautiful bales.

Gary & Kaye greatly enjoyed all their grandkids. Great times were spent fishing, gardening and playing games, his favorites being, Connect Four & Hearts. In the high school years they drove all over the panhandle, following football, volleyball and basketball games.

Gary moved from his ranch to the Gordon Villa in 2015 and so enjoyed the residents and staff. He grew tomatoes for all his neighbors and friends, and he always had time for a visit. He especially loved visits from his grandkids and great grandkids, they were the pride & joy of his life.

Gary loved travel and enjoyed their 25th anniversary trip to Mazatlan. He also enjoyed visiting Branson, Missouri; Florida, and Alaska and even traveled by train to California with friends Harold and Gail Glassgow.  These two dear friends also enjoyed many years of the Black Hills Stock Show together.

He loved flying and was always quick to share how many trips (at least 7) he’d made to Georgia to visit Tessa & Natosha. His greatest adventure though was fulfilling a lifelong dream of traveling to Scotland with Tessa. He got to explore Edinburgh, stand on the mountain tops, admire ancient castles, travel through Isle of the Skye & pet some hairy coos. He was fascinated by Scotland because of his family heritage and origins there and the stories told by a missionary they’d hosted decades prior. The trip ended with an 8 hour tour of New York City and a helicopter tour where he got to take in the city from the sky. He was in awe of the tall, tall buildings and getting to stand in Times Square- where Good Morning America was broadcast from. From Braves games, to antique stores or an afternoon at the sale barn; he never met a stranger and would strike up conversations everywhere he went, wearing his well loved cowboy hat that seemed to draw people in.

Memorial Services will be held at Pleasant Point Community Church South of Gordon on October 27th, 2021.

The family suggests memorial contributions be made to the Pleasant Point Church or the Gideons Foundation (https://www2.gideons.org/donate) in honor and memory of Gary Frye.