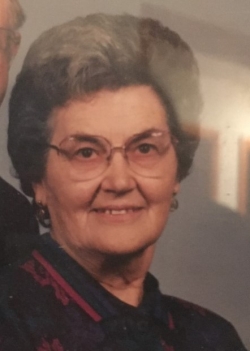 Bertha grew up on the family farm/ranch and loved the country way of life. She graduated Rushville High School in 1947 and married Lloyd Landreth later that year. To this union, five children were born – Virginia, Rudy Lloyd, Larry Arthur, Joyce Marie and Bernita Margaret. They grew as a family on their ranch, first just north of Rushville then later on the place north of Hay Springs near Beaver Valley.

Bertha was a multi-talented lady with many artistic gifts. She was a proficient pianist and could play almost any piano piece by ear, rarely had any need for sheet music. She loved to entertain her family and at nursing homes and other local events on the piano and accordion. She was a detail-oriented seamstress, making clothing for family members and hundreds of hand-sewn quilts over the years which were done for charity and also gifted to family and friends alike. She continued to sew with the Immanuel Lutheran Church quilt group up until the last few months prior to her death. She loved crafting and was extremely creative, always coming up with some new woodworking idea for Lloyd to cut out for her to paint and to share with others. She was a world-class cook as well and loved making huge Sunday dinners for extended family, as well as cooking at various diners in the area and was camp cook for Beaver Valley Camp for several years. Her meals were often prepared from home grown fruits and vegetables from her own garden and whatever the boys would hunt and bring in for her skillful preparation. She shared her time with children at the country school down the road as a teacher’s aide in some of the last days that country schools operated. Her favorite hobby in her later years was following all her grandchildren’s and great-grandchildren’s activities and she loved sharing her history and wisdom with any of them that asked. The love of her Savior shone through her in so many ways.