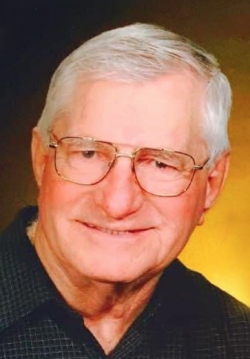 Linford “Lin” Adam Mockerman, 88, of Pierre, SD, died October 10, 2021, at Avera St. Mary’s Hospital in Pierre. Per his wishes there will be no services at this time.

Linford was born August 5, 1933 to Adam and Josephine (Meurisse) Mockerman in Tescott, KS. He attended school there before the family moved to Brookville, KS, where he graduated high school. He served in the United States Army from 1952 until 1955. Upon his return from the army, he married Eleanor Johnson on January 1, 1956 in Omaha, NE.

Lin was in the Dime Store business. This kept the family moving as he had different stores throughout the years, such as Woolworth’s, JJ Newberry and Ben Franklin stores. Linford and Eleanor settled in Gordon, NE, before moving to Pierre to be near family. Linford enjoyed hunting and fishing and was nicknamed “Big Cat.”

Lin was preceded in death by his parents, his son Michael Wade Mockerman and son-in-law Mike Schwinler