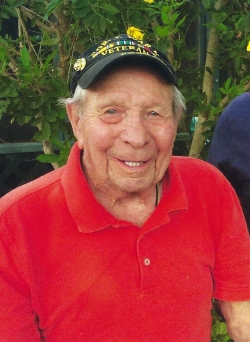 Robert ‘Bob” Hollstein was born on March 11, 1924 in Hay Springs, Nebraska to Will and Elsie Hollstein, the sixth of ten children.

Bob passed away peacefully at home on August 29, 2021 in McAllen, Texas at the age of 97 due to pulmonary disease after a short period of declining heath. His wife Joy and his stepdaughter, Kimberly, were at his side. Just a bit more than a week earlier he was still riding his bicycle once or twice a day. He loved to stay active with biking and swimming being his main physical fitness activities, but also was an avid reader of non-fiction and a huge fan of sports. His love of sports started in his early years when he was a standout in football and basketball at Hay Springs High School from where he graduated in May of 1942. Of course, his favorite team was Nebraska Cornhuskers Football, but in his later years he was also an enthusiastic fan of the San Antonio Spurs and loved watching professional tennis, especially Andy Roddick.

After high school he lived in Washington, D.C. for a time attending college while also working part time at the Washington Naval Shipyard prior to enlisting in the U.S. Navy in April of 1943 after getting good advice from his older brother Ed who was serving in the U.S. Army JAG Corps. Bob was proud of his military service as a Signalman/E-2 on the USS Rocky Mount which he boarded for assignment at Pearl Harbor, Hawaii in January of 1944 after training at Farragut Naval Training Station in Northern Idaho. During World War 11, the USS Rocky Mount command flagship directed major amphibious campaigns. Bob was one of the early crew members on ‘The Rock’ which played a key role in six campaigns in the Asiatic-Pacific Theater including the Marshall Islands, Marianas Islands and Philippines. Years later, he delighted in attending ‘Rock’ reunions with former shipmates and family members.

After honorable discharge from the Navy in 1946, Bob returned to Hay Springs and went into the meat packing business with his father and his brother Bill. He was also a partner with brother Bill in other businesses including a grocery store and with brothers Bill and Ed in the grain elevator business. Over his 40+ years of business in Hay Springs and Rushville, he actively participated in community affairs serving on city boards and often donated to the Rushville and Hay Springs Volunteer Fire Departments and to charities. Bob was honored to be a member of various national organizations including the American Legion, VFW, and Chadron Elks Lodge; and was a member of the Methodist Church.

Bob married Geraldine (‘Jerry’) Engler in 1947 who had a young two-year-old son, Donald, whom he later adopted. Children born to the couple were Gary (1948), Jim (1950) and Dianne (1956). They raised a loving family in their marriage of more than forty years and enjoyed decades of family gatherings. They divorced in 1991.

In 2002, Bob married Joy Ashley. They lived happily in a retirement community in McAllen, TX for years enjoying countless social activities with special friends and neighbors, traveling, and enjoying annual treks to Nebraska and Colorado to visit family and friends, and to get reacquainted with high school classmates during Hay Springs High School class reunions.

Bob was a loving husband and father; an inspiration to those who knew him; enjoyed hunting and fishing in his younger years; delighted in traveling; was a diligent successful businessman; and an independent, self-reliant, freedom-loving thinker.

He is preceded in death by his parents, Will and Elsie; brothers Ed, Bill, and Fredrick; sisters Maxine, Irene, Shela and Shirley; former-wife, Geraldine; and sons, Donald, and Gary.

The family suggests that memorial donations be made to the Rushville or Hay Springs Fire Department, Methodist Church or American Legion. Memorial service is tentatively planned for Saturday, May 28th, 2022 (Memorial Day weekend) in Rushville, NE (delayed because of the COVID pandemic and to allow more family and friends to attend). The actual date and time of the memorial service to be announced later.