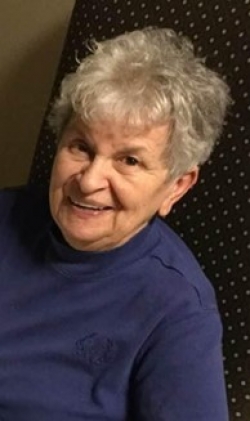 It is with great sadness we announce the passing of our mother Elsie Elizabeth Garrett. Elsie passed away at the age of 83 on 11/20/21 at 3:35 p.m. due to complications from Covid. Elsie was born on February 10th, 1938, in Goshen, IN to Vern and Lucille Six. She had a younger sister named Mary and they were raised in North Liberty, IN.

She later married Phil Garrett in Lakeville, IN in October 1955. Elsie had seven children: Pam Hare (Vernon), Theresa Winters, Mary Musfelt (Craig), Dixie Fair (Gordon), Becky Romero, Phillip Garrett (Wendy), and Michelle Helminger (Jon). The family moved to Gordon, NE in 1968 until the passing of Phil Garrett. Elsie moved back to North Liberty, IN and raised her two youngest children, Phillip and Michelle.  She worked in North Liberty at Liberty Drug until she retired.

Elsie returned to Nebraska in 2004 and resided with Charlie Nelson until her passing. Elsie loved to be outside gardening and planting flowers. She loved playing games with family and friends, especially poker – she was a shark and loved winning her children’s money. She was compassionate and welcomed all with an open heart. Elsie had an incredible memory and loved telling stories about family and friends. Her grandchildren and great grandchildren brought her so much joy and she loved the calls and visits she would get.

Funeral services will be held at 10:00 a.m. on Friday, November 26, 2021, at St. Leo’s Catholic Church. Father Dan Gilbert will be officiating the service - graveside services and burial will follow at Gordon Cemetery.

Memorials for Elsie Garrett may be directed to Chamberlain-Pier Funeral Home for a later distribution. PO Box 366, Gordon, NE 69343.