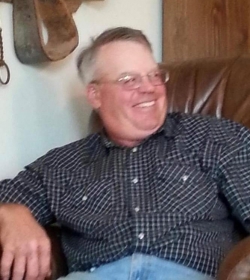 Terry Leonard Nelson was born June 8, 1955, to Forrest and Hazeloraine (Sandoz) Nelson in Gordon, Nebraska. He passed away on January 7, 2022, in Scottsbluff, Nebraska. Terry grew up on the family ranch north of Lakeside. He made his choice to serve God when he was eleven and remained true to that choice his whole life. Terry lived with his cousins, the Swayne’s while completing the first 2 years of high school, in Gordon. He lived with Clifford and Sybil Sager while attending Rushville High School for the final two years and graduated in 1973. After graduation, he continued his ranching career. On November 23, 1991, Terry was married to Kristine Schuebel. To this union two children were born, Troy and Tara. Terry carried on the ranching tradition for 47 years, caring for the land and cattle he loved. Due to his struggle with Myasthenia Gravis and his deteriorating health he retired in 2020 leaving the care of his land and cattle to the next generation and moved to Gordon in August 2021.

Terry was a quiet, God-fearing man. He cared deeply for his wife and children. He dedicated his life to the Lord, his family, his cattle, his horses, dogs and cats. Terry knew his cows, even when he couldn’t see them. He knew their pedigrees, their histories, and their attitudes. He had a story for every valley of his ranch; stories of family history, of horse wrecks, of changes in the land, of bulls that had the best daughters and ones that made snorty cows.

Terry is preceded in death by his parents, Forrest and Hazeloraine Nelson. He is survived by his wife Kristine of Gordon; his son Troy (Sara) of Columbia, MO; his daughter Tara of Ellsworth; brother Trent (Sandra) Nelson of Alliance; sister Trenda (Jonathan) Nielson of Ellsworth; stepmother Lillian Nelson of Alliance, and numerous nieces, nephews, and in-laws.

Funeral services will be held Thursday January 13, 2022, 2:00 pm at the Gordon City Auditorium with burial in Fairview Cemetery, Rushville, NE. A memorial has been established for the Gordon or Rushville Rural Volunteer Fire Department and donations may be sent in care of Chamberlain-Pier Funeral Home, PO Box 366, Gordon, NE 69343.