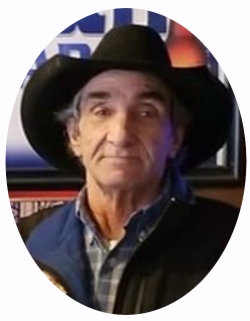 Fredrick Dean Heathershaw was born on April 28, 1953 in Rapid City, SD to Charles and Verna (Pourier) Heathershaw. Fred made his last and final ride here on earth on January 24, 2022 at the Oglala Sioux Lakota Nursing Home in Rushville, NE.

Fred attended grade school at Rapid Valley and in Interior, South Dakota then went on to graduate from Rapid City Central in 1971. He was an adventurous little boy and continued to be so his entire life. He was a jack of all trades: a talented artist, electrician, wood carver, horseman, movie stuntman, cowboy, but his love as always, was rodeo! He started his rodeo career as a young boy. Many nights you’d find the entire family, brothers, sisters, & cousins, at their grandparents arena, bucking out cows, steers, calves, colts, & anything that grandpa would allow! Always a friendly competition!

Fred continued his rodeo career competing in Little Britches Rodeos, High School, Amateur, PRCA, but his love was Indian Rodeos. Fred qualified for the Indian National Finals in 1978 in the Bull Riding. When his rodeo career was over Fred began to judge rodeos in Montana, North Dakota, & South Dakota.

Fred was a stuntman, wrangler, and an extra for movies such as Lakota Woman, Dances with Wolves, & Thunder Heart. In 1993, he traveled to Meaux France to perform at EuroDisney with the Wild West Show. He served on the United States board for the Canadian Museum of History. Upon his return from France he settled in Montana, working for the Small Ranch & Rumney Ranch. He was a cowboy and guide for the Dude String. He had charm and the gift of BSing which was great for the dude string.

Fred moved back home to the South Dakota Badlands after the passing of his dad. He continued to judge rodeos. The highlight of the year was to attend the Indian National Finals Rodeo where he worked as the out-gate man for several years. He always said he had the best view of the rodeo running the out-gate. It was from that position where he proudly watched his family compete. He was especially proud when at the end of the week of tough competition his nephews and nieces loaded up World Championships to head home to South Dakota and Montana! Fred was known to many as ‘Uncle Rodeo!’ He loved that title!

Fred was quick witted and always had plenty of stories to make a person smile and laugh! He had a love for his family & friends, always sending them words of encouragement or songs he loved, checking on them as they traveled the rodeo trail.