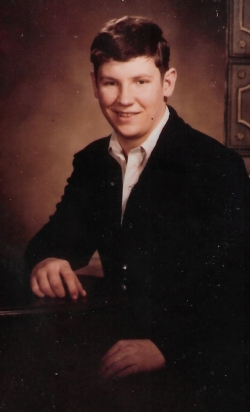 Loren Wilson was born on August 14, 1963 to Gene and Mary Russell Wilson. Loren grew up learning many skills including auto mechanics, farming, ranching, and carpentry. He helped his grandpa Wilmer and uncle Robert Russell working in the hay field and going to brandings.

He attended Gordon High, where he played football and was on the wrestling team. After graduating in 1981, he went to college at Kearney to study Architectural Engineering. That was not what he wanted to do, so he returned to Gordon in May 1982. He worked at the feedlot driving heavy equipment and fixing whatever broke down. It wasn’t long before he began dating Robin Malmberg. They had attended high school together and wrestled calves at the brandings for several years.

In February of 1984, Loren and Robin were married and became a family of three with Robin’s daughter Brianne. Loren adopted Brianne in November 1984. Also in November, son Terry joined the family. Loren worked for his father-in-law, Mack, from January 1984 to July 1987. The Wilson’s moved to Halsey and Loren took a job as mechanic in Thedford, but the boss there decided to cut back on help and the family found themselves moving to Dunning where Loren worked for Bill Zutavern. It was more cattle work than Loren liked so in December of 1989 the family moved to Sidney, NE where Loren began studying Diesel Mechanics. In June 1990 Christy was born and a year later, with his degree in hand, Loren began working for Hawkins Construction as a mechanic near North Platte. He worked seven days a week and such long hours he was missing time with family. At Robin’s urging, he called Bill Zutavern for any possible leads on mechanic jobs. Bill hired him back and the family found themselves back at Dunning for the next 4 years. In March of 1995, the family moved to Hay Springs where Loren began a new job selling Mountain Man Nuts and Fruit products. This lasted for 10 years before the shaky economy forced Loren to sell the route and go to work at Prairies Edge Pawn in Rushville and then Chadron. He enjoyed the job and the people he met.

Loren loved his family, and spent as much time as possible helping put on shingles, getting a vehicle running, or fishing. He could fix anything and had a passion for woodworking. He built a variety of things for family and friends.

Loren will be missed by his wife Robin; children Brianne Wilson, Terry (Tara) Connor and Riley, and Christy (Cameron) Corneliuson; his mom Mary; sister Betty (Max) Zapata; brothers Corey (Tina) Wilson, Corby (Michelle) Wilson; and nieces and nephews plus a few great nieces and nephews. Also, among the people who will miss Loren are sister-in-law Lisa Reed and brother-in-law Eric Malmberg, not to mention aunts and uncles and cousins.

He was preceded in death by his dad Gene Wilson, father-in-law Mack Malmberg and mother-in-law Jerri Malmberg, as well as his grandparents, nephew Lane Malmberg and his Uncles Ted Russell and Bill Thomas.

A memorial has been established FOR the Hay Springs American Legion and donations may be sent in care of Chamberlain Drabbels, PO BOX 443, Hay Springs, NE 69347.