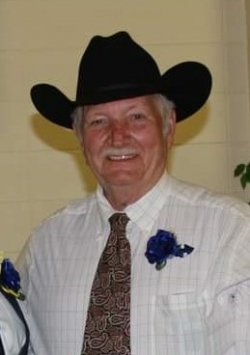 Arthur A (Tony) Daringer 80, of Gordon NE died Monday January 31st, in Bayard NE after a long battle with cancer. He was born January 28, 1942, in Hebron, NE, to Arthur John Daringer and Lois Katherine (Hergott) Daringer. Tonys catholic faith was always very important to him. Tony received the sacraments of baptism, his first Holy communion and confirmation at the Sacred Heart Catholic Church in Hebron, NE. As a young boy he lived with his family on a farm outside of Hebron, NE. He attended Sacred Heart Catholic Elementary School and public high school in Hebron until he graduated in 1960. In 1961 Tony attended K-State and in 1962 attended Fairbury Junior College then in 1964 he joined the National Guard.

January 7th, 1967, Tony married the love of his life Judith Lynn (Casey) Daringer and was blessed with a large loving family of 9 children. The couple farmed and ranched in eastern Nebraska then in 1983 moved to Gordon, NE while Tony worked for National Farmers Organization (NFO). Tony was a very successful cattle buyer that impacted many ranches that enabled him to made lifelong friendships all over the world.  The love that Tony had for horses ran deep. He could talk for hours about blood lines and his Skipper W Horses.

He is preceded in death by his wife Judy, his son David, daughter Holly, his mother Lois, and father Art.