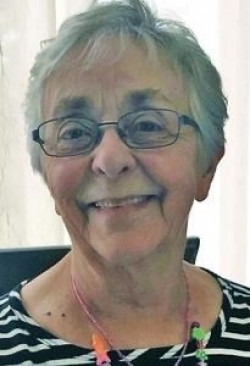 Shirley (Vollentine) Dohring gained her angel wings May 3, 2022, while hospitalized at the University of Nebraska Medical Center.

Shirley was born April 12, 1940, to Bernadine (Warnke) and Woodrow “Pick” Vollentine at Gordon, Nebraska. She obtained her early education in Gordon and graduated from Gordon High School in 1957. She attended business college in Rapid City, SD after high school.

She married Steve Dohring and they moved to California for a short time and later to Hill City, SD, where Steve worked for Ryder Construction. They returned to Gordon in 1960 and had two daughters, Lynne and Kathryn. Shirley worked as a bookkeeper for Shald’s Market and at Preferred Builders, a lumber yard/construction business Steve started. In 1969 they moved to Lincoln, NE so Steve could attend the University of Nebraska School of Architecture. Shirley was employed at the University as a secretary. In 1974 they moved to Omaha and Shirley transferred from UNL to UNMC where she worked in financial aid, later becoming the assistant director of the financial aid department. She loved working directly with the students. She also spent a few years working at Creighton and for HEAF.

Shirley and Steve divorced in 1989 and she never remarried.

The lights of her life were her granddaughter Tracy Lea and great grandchildren Jaeden, Ava, and Damon. She loved attending their ball games and school programs and missed very few. She was an avid Husker football and volleyball fan and loved college basketball. She was also an avid reader. Also, after she retired, she volunteered at the soup kitchen and did many behind the scenes to help people and they never knew. She did not ever seek the spotlight. She was also a mentor for Westside High School students.

Gigi will be so missed by her friends and especially family. She was our rock and always there for us, no matter what we needed. She had a great sense of humor, quick wit, and an opinion about everything and was always happy to share it! She was the most honest, independent, compassionate person on earth. We love you and we miss you Mom, Gam, Gigi.

More in this category: « Kevin Valaika