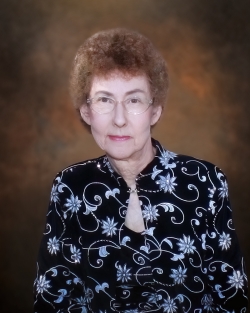 Gretchen lived her entire life in the Nebraska Sandhills, growing up on her family’s ranch which was a part of the original Spade Ranch. She graduated from Gordon High School in 1956 and Chadron Teacher’s College in 1957. She married Don Powles on June 3, 1962, and moved to the Powles Ranch near Bingham; three children were born to this marriage.

Gretchen was a one-room schoolhouse teacher prior to marriage. She never stopped using her teacher training-- as she parented Tena, Jana, and Bryon, as a piano teacher, and as a judge for a variety of speaking competitions. She was “the driver” for her children, grandchildren and countless youth to rodeos, cattle shows, 4-H and FFA events and sports. She shared her love for horses and cattle with everyone.

Music and playing the piano was a lifelong passion. Gretchen played piano in high school, sang in the school choir and performed in play productions. She shared her gift as a pianist playing for weddings, funerals, and accompanying 4-H music groups and elementary musical performances. She served as the pianist for the Bingham Church for decades.

In Gretchen’s kitchen she welcomed people with a well-set table and a hearty meal. She was known for her delicious chocolate zucchini cakes and beautifully decorated sugar cookies. She taught others how to cook and as a ranch wife, it was simply part of her role on the ranch. Gretchen was an accomplished seamstress who was able to sew anything for anyone. In her younger years, she was a crack shot and enjoyed making exquisite leatherwork and ceramics. Her additional hobbies included bowling, reading, collecting miniatures, playing dominoes with friends and nurturing her beautiful flower gardens, especially her roses.

Gretchen attended Pleasant Point Community Church and was a dedicated member of the Bingham Church.

She served as the American Gelbvieh Gals President from 1990-1996. Gretchen was awarded the 1995 Sheridan County Alumni 4-H Award and the 2010 Beta Sigma Phi Woman of the Year Award.

She was preceded in death by her husband Don Powles, her parents Ed and Grace Pisel, sister Dorothy and brother-in-law Joe Shaughnessy, and son-in-law Ron Raglin.

Funeral services will be Thursday, October 6 at 2:00 p.m. at the Bingham Lutheran Church with Reverend Jonathan Oetting officiating. Burial will be in the Bingham Cemetery. Visitation will be Wednesday from 1-7 p.m. with her family present from 5-7 p.m. at the Bates-Gould Funeral Home.

Memorials can be made to the Bingham Lutheran Church or the charity of your choice.